North could face air strikes next

North could face air strikes next 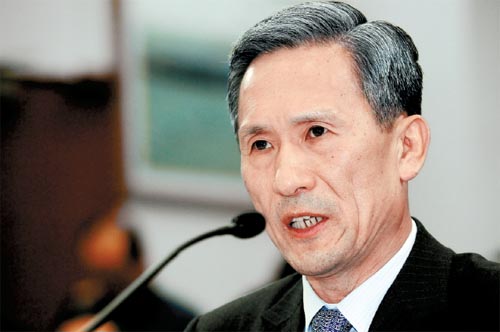 Minister of National Defense-designate Kim Kwan-jin answers questions from lawmakers at his confirmation hearing at the National Assembly yesterday. [NEWSIS]


Kim Kwan-jin, the minister of national defense-designate, said yesterday that South Korea was prepared to hit back with air strikes and “punish the attacker thoroughly” should North Korea launch any further military provocations.

Kim told a confirmation hearing at the National Assembly yesterday that a stronger military response was needed to deter further attacks in the wake of North Korea’s shelling last week of Yeonpyeong Island. The minister-designate touched on his willingness to utilize fighter jets in possible future clashes with North Korea.

“We would definitely use the Air Force to strike back,” Kim said in response to a question at the hearing. During the Yeonpyeong attack, the military deployed its F-15K fighter jets, but it did not conduct an air strike against the North’s artillery sites for fear of escalating the situation.

The decision has been criticized by the public and lawmakers, and Defense Minister Kim Tae-young was forced to resign as a result.

Kim said that the rules of engagement would be changed to strengthen South Korea’s right to self-defense.

“Rules of engagement are valid as guidelines to prevent accidental clashes from escalating,” said Kim. “However, when [a country is suddenly] attacked, that’s a matter of self-defense. The enemy must be punished thoroughly until the source of hostility is eliminated.”

Answering questions from the National Assembly’s National Defense Committee, Kim underscored the possibility that North Korea could strike again, repeating a similar warning this week by the director of the National Intelligence Service.

“Up until now, North Korea has made provocations in ways that were difficult to foresee, and the provocations are getting larger in scale as they occur. There is a possibility that they will attack [again] in an unexpected way,” Kim said. “Including the five western border islands, I believe our entire country is a possible target for provocations. Attacks can be focused in one area, or they can happen at once in different regions. Preparations will be made for all possibilities.”

Kim, a former chairman of the Joint Chiefs of Staff, said in a statement before his hearing that South Korea’s security was at its most critical stage since the end of the Korean War.

Kim’s comments came amid signs that the North is strengthening its military preparations and taking moves that could signal another attack.

A South Korean government source told the JoongAng Ilbo that North Korea’s army had recently added around 100 more multiple-launch rockets and about 200 tanks along the inter-Korean border.

“North Korea now has 5,200 rockets, where they had 5,100 before. At the locations where they have installed their artillery, it’s possible for North Korea to spring an attack toward the metropolitan area,” said the source.

North Korea’s 240-millimeter multiple-launch rockets have a range of 60 kilometers (37.3 miles) and are said to be able to fire 12 to 22 rockets measuring 5 meters (16.4 feet) in rapid succession.

The source said North Korea had developed tanks similar to Soviet-designed battle tanks and has installed them at the front lines.

South Korean intelligence also believes that North Korea is busy practicing for what may be another attack.

Kwon Young-se of the National Assembly’s Intelligence Committee said on Thursday, “The National Intelligence Service has pointed out four cases that may be signs of an additional provocation from the North. Military drills in the North have been continuously conducted, and they have also been holding firing exercises aimed at our loudspeakers.”

South Korea has installed loudspeakers along the demilitarized zone in the wake of the Cheonan sinking in March to broadcast propaganda, though they have not been operated.

A Japanese newspaper recently quoted a North Korean military official as saying that North Korea had plans to attack areas of Gyeonggi.

When asked by Grand National Party Representative Kim Dong-sung about a suspected attack from the North, Kim replied, “This is a broad subject, and we will be scrutinizing the matter.” But he dismissed the chance of a full-scale war as slim, citing the military power of South Korean and U.S. forces and the North’s domestic problems.