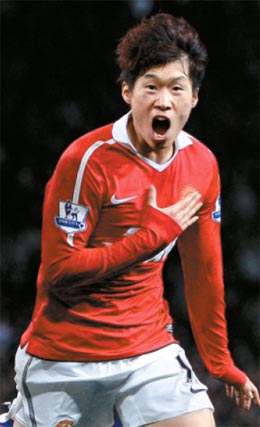 Many Asian football stars dream of playing in Europe. Not all succeed.

Now days they aren’t just concentrated in the English Premier League but can also be found in Germany, France, the Netherlands and Scotland. Korea is well-represented in the West in contrast to other Asian nations, and this is not by accident.

Mike Adamson, a sports writer at the British newspaper The Guardian, points to the exploits of Park Ji-sung and Lee Chung-yong in the English Premier League as an example of why Korean players are in increasing demand.

“The impression in Europe of Korean players is that they are tactically astute,” said Adamson. “They are very disciplined - witness the many ways in which Park Ji-sung has been used by top coaches Guus Hiddink and Sir Alex Ferguson at PSV Eindhoven and Manchester United, either on the wing to track the runs of opposing fullbacks or behind a striker to pick up positions between the opposition’s defense and midfield.

“He, like Lee Chung-yong, at Bolton, is canny at identifying where to be at all times and sufficiently fleet [footed] to make the most of these situations. The Koreans are also tremendously fit and look after themselves off the pitch, which cannot always be said of some European players.”

It is a virtuous cycle. The more Korean players succeed in Europe, the more they are appreciated there and the more young players at home want to follow in the footsteps of the likes of Park Ji-sung.

“Most Korean players, especially the younger ones, are hungry to prove themselves on the biggest stage,” said Kim Se-hoon, a sports reporter for the Korean daily newspaper the Kyunghyang Shinmun. “They want to see what level they are at and are attracted by the fact that their exploits overseas will be closely followed by the Korean people.”

Kim, like Adamson, believes Korean players have positive qualities and sees other reasons for their success in Europe.

“Korean players obey the coach at all times and follow instructions unconditionally,” said Kim. “Also, one of the biggest qualities of Korean football is the fact that players are strong at teamwork, are willing to sacrifice themselves for the team and work hard in training and on the field at all times.”

Some players take time to settle in while others make an impact immediately. Son Heung-min, for example, scored in his first game with Hamburg in the German Bundesliga on Oct. 30.

He followed that up with two goals at Hannover 96 on Nov. 20.

The 18-year-old was sent to the former European champion by the Korea Football Association in order to further his development.

Son has earned praise from one of Europe’s top strikers from the past decade.

Veteran Ruud van Nistlerooy, who played for Manchester United and Real Madrid before joining Hamburg, knows a thing or two about scoring goals and likes what he sees in his young Korean teammate.

“After a training session, you can see that he is something special,” the Dutchman said. “Son is the future. With him, Hamburg will have a lot of success. He is young, has a good head, and even at the age of 18 is making a significant impact in the Bundesliga.”

Ki Sung-yueng is three years older than Son but already has played 29 games for the Korean national team. Despite that, he struggled to get going with Scottish giants Celtic after arriving in January.

This season, though, the midfielder has established himself as a valued member of the starting 11.

Richard Wilson, a writer with the Scottish newspaper The Herald, has been watching the former FC Seoul player become a Celtic star after a difficult start.

“Most Celtic supporters and journalists recognize Ki to be a very talented [ball passer], with a superb technique in delivering set-pieces. The manager seemed a little wary of playing him at first because Ki liked to be on the ball, but maybe did not contribute as much off the ball.

“He has earned the manager’s trust now, who recently described him as world class. It is difficult to see him being dislodged from the starting line-up at the moment. He is becoming a more complete midfielder.”

One of Ki’s teammates at Celtic is 2002 World Cup star Cha Du-ri, whose father Cha Bum-keun played in Germany in the 1980s.

But the senior star in Europe these days is still Park Ji-sung.

After three English Premier League titles and appearances in the UEFA Champions League final, Park was not at his best earlier this season but he has recently found his form and scored three goals in November.

John Brewin, a senior editor at ESPN Soccernet, believes that Park has restated his value to the team, especially with a last-minute winning goal against Wolves.

“Park looked like he was possibly going to have to get used to life on the fringes at Manchester United but of late he has been able to take advantage of injuries to colleagues Ryan Giggs and Antonio Valencia and play a leading role,” said Brewin. “His two goals against Wolves were key to United’s title charge and probably his best moments in a United shirt while his supplying of a goal for Patrice Evra, his closest friend at United, saw the Frenchman say he was going to buy Park a car to thank him.”

The modest midfielder might not mind that he is in danger of being upstaged in England by Lee Chung-yong.

Lee arrived at Bolton Wanderers in the summer of 2009 and quickly established himself as a fan favorite.

This season, Bolton, a team that can often be found lower down the standings, has found itself near the top.