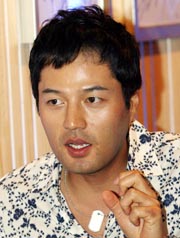 Two entertainers are in hot water for alleged drug possession.

Actor Kim Sung-min was arrested at his home in Yeoksam-dong, southern Seoul, on Friday for possession and use of methamphetamines.

Local news stations have reported that Kim confessed to smuggling the drugs from overseas.

And rapper Crown J is the subject of an investigation launched by the Seoul Central District Prosecutors’ Office on Dec. 2, when he landed back in Korea after spending time in the U.S. He is charged with using marijuana outside the country five times from May 2009 to November 2010.

According to the agency, the rapper has already confessed to using marijuana once or twice overseas. He is currently at home awaiting further charges.

It is illegal for Korean citizens to use drugs inside or outside the country.

Although there has been speculation about a link between the two cases, a prosecution official has refuted that idea.

“The investigations into Kim and Crown J are separate,” the official told local newspaper Money Today, yesterday. “As for Crown J, he is [being investigated] independently. And as for Kim, we will look into any additional people that may be affiliated with the case.”

After his arrest, Kim was edited out of the KBS entertainment program, “Happy Sunday,” where the actor was a regular guest.