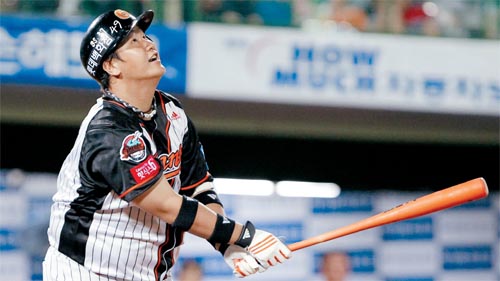 Lee Dae-ho of the Lotte Giants had a dominating season. He already has a Golden Glove award under his belt, but many observers are waiting to see if Lee can earn the most votes ever for the honor this year. By Chung Si-chong


With the annual KBO Golden Glove Awards ceremony set to take place tomorrow, there are several subplots to keep an eye on.

The awards are given out to honor the top players at each respective position. Based on votes from sports journalists, the annual event has always had interesting subplots. In 2007, Yang Joon-hyeok of the Samsung Lions tied an all-time record by earning his seventh Golden Glove award. In the following season, the Lotte Giants - which managed to reach the postseason for the first time in eight years - had five of its players win the Golden Glove. Last season, there were five first-time winners.

This year will be no different.

Lee Dae-ho of the Lotte Giants had a dominating season in which he topped the league in seven offensive categories and earned the league’s Most Valuable Player honor. He has already secured a Golden Glove award, but it will be interesting to see if Lee can earn the most votes ever this time around.

Lee Jong-wook holds the previous record, racking up 350 votes in 2007. Since the total number of votes cast fluctuates from season to season, there will have to be at least 350 votes in order for Lee Dae-ho to have a shot at setting a new record.

Among pitchers, Ryu Hyun-jin of the Hanwha Eagles and Kim Kwang-hyun of the SK Wyverns are expected to be the finalists for the Golden Gloves. Both pitchers are vying for their second Golden Glove award. Ryu won the award in his rookie season of 2006 and Kim won in 2008. Aquilino Lopez of the Kia Tigers won the award last season. In helping SK to a Korean Series title this season, Kim posted a 17-7 record with a 2.37 ERA and 183 strikeouts. Ryu finished second in wins with 16 wins and four losses because of a late-season injury but topped the league with a 1.82 ERA and 187 strikeouts.

Two veterans are favored to win the award at the catcher position. Cho In-sung, 35, of the LG Twins and Park Kyung-oan, 38, of the SK Wyverns are the oldest candidates. Cho had a career year, hitting .317, 28 home runs and 107 RBI. Cho became the first catcher in the KBO to surpass 100 RBI in a season. If Cho wins the award, the 13-year veteran could become the oldest first-time winner. Cho was nominated twice before but lost out to Park and Jin Kap-yong.

Park hit .262, 14 home runs and 67 RBI, but his leadership behind the plate was a huge factor in SK’s championship season.