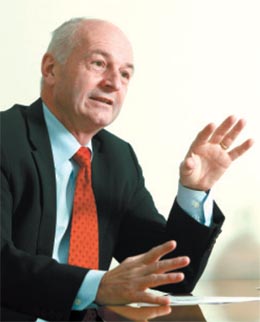 Juergen Woehler, secretary general and executive director of the Korean-German Chamber of Commerce and Industry, recently succeeded in expanding the organization’s membership base to 500, a meaningful achievement as the body approaches its 30th anniversary next year.

Currently, Germany ranks as Korea’s largest trading partner in Europe in both exports and imports.

The two countries’ trade volume in 2009 stood at about $21 billion, and German cars account for 57.8 percent of all imported automobiles sold in the Korean market so far this year.

In an interview with the Korea JoongAng Daily at his office in Hannam-dong, Seoul, Woehler described the chamber’s plan for next year’s 30th anniversary and provided his views on the recently concluded Korea-EU trade agreement and its impact on trade between the two countries.


Q. Recently, the chamber succeeded in bringing its membership ranks past the 500 mark. Why is this important for the chamber and what are you going to do for your new members?

The size of our membership is very important because it gives us status and a stronger reputation, and it helps other members get more information from each other.

But unlike other chambers, we don’t rely too much on our members because we are kind of a trade section of the German Embassy in Korea and we receive financial support from the German government.


What kind of services do you provide?

We are involved in quite a broad range of activities. We help German companies get access to Korean companies, the market and information about suppliers and buyers. We offer legal advice and information on how to establish a presence here.

We help exhibitors and visitors to Korea, providing translation services and market studies. We are also supporting Korea in attracting investors from Germany.


What is the most significant difference between your chamber and other chambers in Korea?

We generate 75 percent of our budget and the remaining 25 percent is subsided by the German government, which is different from other chambers in Korea. Other countries’ trade sections are in their embassies.

The German government annually assigns about 500,000 euros ($661,750) to us. We are a very bilateral chamber, too, which is very unique: half of our board members are Korean and the other half are Germans.


What type of annual events and seminars do you offer?

We have three different types of functions. We have social events to make all members happy, which largely consist of dinners with various themes.

Then we do events that give information to our members covering the forecast for the economy or the free trade agreement. Lastly, we promote Germany to Korean companies and also try to lure German investors to Korea.


How do you think things will go after Korea-EU FTA comes into effect?

We are very positive. So far, Germany is the biggest exporter to Korea in Europe, selling machinery, automobiles, petrochemicals and so on. Germany accounts for more than 40 percent of all EU exports to Korea. So we are exporting more to Korea than France and Britain, Italy and Spain. In fact, Germany will see a lot of profit from this FTA because Korea will open its market more to our companies.

Korea is one of our strongest trading partners and more important than India. For Germany, Korea rank third in Asia in the scale of trading behind China and Japan. The Japanese economy is five times bigger than Korea in size, but German exports to Japan are only about double, or a bit, than those to Korea.

I am confident that the trade volume between Korea and German can someday overtake that between German and Japan. We also have a steady flow of German investors in Korea, more than Japan, because the Korean market is relatively open to medium and small companies.

We will hold a big gala in late June and I expect that the German economic minister will come and hopefully the Korean prime minister as well.