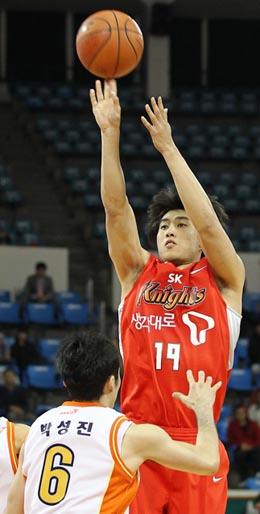 SK Knights fans will be in for a treat before the end of the year when their team’s sharpshooting forward Bang Sung-yoon is set to return to the Knights lineup after months of injury rehab.

“Bang is expected to join team practice next week and will, in all likelihood, be in game shape by the following week,” said a Knights official.

Bang is expected to make his return around Dec. 25. When Bang does return to the lineup, it will be his first KBL game since a March 7 game against the ET Land Elephants. In the past 10 months, Bang had to deal with lingering ankle injury and rehabilitation. He was initially tabbed to make his return at the start of this season but his comeback was delayed twice more, once until after the 2010 Guangzhou Asian Games break and again recently.

The 6-foot-5 forward boasts a smooth stroke and a wide range but is considered injury-prone. Bang had to deal with an assortment of injuries throughout his career, including his shoulder, ribs, ankle, fingers and knee. This time, it’s his right ankle that’s been hampering his return to the lineup. Although his ankle is not completely healed, Bang has decided to make his return rather than wait it out and face the possibility of missing the entire season.

Having played for two different teams in the NBA Development League (D-League) with the Anaheim Arsenal and the Roanoke Dazzle, Bang is considered one of the most accomplished shooters in the KBL. After three years at Yonsei University, Bang decided to forgo his senior year and test his skills in the D-League in hopes of making it in the NBA. Drafted by the Dazzle in the fourth round in 2004, Bang led the D-League in 3-pointers with 38 in 41 games during the 2004-05 season.

Bang was drafted by the KTF Magic Wings in the 2005 Amateur Draft and reached a deal. Under KBL rules, a drafted player must reach a contract with his team or he becomes ineligible to play in the KBL for five seasons. He briefly played for the Anaheim Arsenal in 2008-09 season.

The Knights have several All-Star caliber players like Joo Hee-jung, Kim Min-soo, Kim Hyo-beom and Terrence Leather in their lineup but without a solid center, they need another shooter in the lineup. With Bang returning to the lineup, the scoring load on other Knights players like guard Kim Hyo-beom will lighten.

“To be honest, it’s been tough,” said Kim before a game against the Dongbu Promy on Dec. 12. “When we go up against a team with size like Dongbu, it’s especially tough. We need to connect on our shots from various areas of the court but that has not been happening of late.”

Kim ended up hitting six 3-pointers and scoring 35 points but that wasn’t enough as the Knights lost the game to the Promy, 93-88. With the addition of Bang to the lineup, the Knights can have two shooters who can offset the height disadvantage the Knights have in their front court.

Once tabbed as one of the favorites to win the championship this season, the Knights are currently tied for fifth with a 9-9 record. With Bang expected to return to the lineup in the near future, the Knights are hoping for a turnaround to what has been a disappointing start to the season.