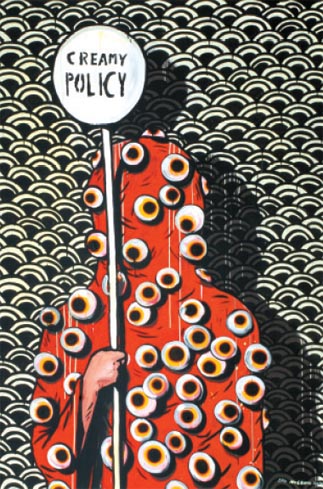 CHEONAN, South Chungcheong - In a corner of Arario Gallery in Cheonan stands a hyper-realistic life-size sculpture of a man holding a signboard that reads “Navin” in Hangul.

Around his feet are many other signboards that also spell Navin in various other languages. Behind the sculpture is a Bollywood-style billboard on which the man with the same face as on the sculpture appears with dramatic expressions.

The man is not an imaginary character but the artist himself, Navin Rawanchaikul, an Indian-Thai man who is married to a Japanese woman.

“His works talk about his hybrid identity,” said June Y. Gwak, one of the directors of Arario.

“Within the cultural rubrics of our age, in which [the] center-subordinate relationship is being disintegrated into multiple centers to form a conceptual archipelago, South Asian culture, with its inherent hybridity and diversity, gives rise to a rich array of discourses,” Arario said of the title in a statement about the exhibition.

Agus Suwage’s mixed media installation “Are You Going With Me?” (2006-2007) is on display at Arario Gallery Seoul. Provided by the galleries

Works by 11 of the artists are being shown at Arario Gallery in Cheonan next to the newly opened Shinsegae Department Store’s Chungcheong branch. The other two artists’ works are on display at the gallery’s Seoul branch, which is near the main street in Samcheong-dong.

At the gallery in Cheonan, Philippine artists and married couple Alfredo and Isabel Aquilizan show installations that reflect the life of their country’s working-class people.

One of these features pairs of giant multicolored wings, a closer look at which will reveal that they are made of old flip-flops once worn by fishermen.

Another artist from the Philippines, Geraldine Javier, reconstructs images of her favorite horror movies, including “The Shining” and “The Exorcist,” through combinations of paintings and textile crafts.

“Now I am no longer so scared by such movies as I was in my childhood because I have come to know that reality is more scary than the movies. But I still enjoy watching scary movies,” she told the press at the gallery in Cheonan last week.

The exhibition also includes works that take a critical look at political and social issues. Among them, the works by Eko Nugroho of Indonesia easily appeal to the public with their graffiti-like style.

The works at the exhibit in Seoul have darker undertones. These works center around the suffering of people living as minorities in Southeast Asian society.

Agus Suwage of Indonesia constructed an installation in which pig skulls mounted on skateboards appear to march into an uncertain future, and paintings that depict humans with pig heads.

“The pig is an animal treated with contempt by Muslim society,” Gwak said. “Through the works, Suwage expresses his identity as a minority ethnic Chinese in a predominantly Muslim country.”