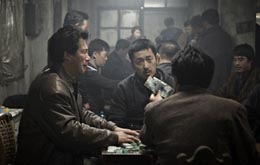 Na Hong-jin, director of the 2008 award-winning film “The Chaser,” is back with another action thriller that crosses borderlines. He brings with him “Chaser” stars Ha Jung-woo and Kim Yon-seok, who are once again in the lead.

Gu-nam (Ha), a taxi driver in the Yanbian Korean Autonomous Prefecture in Jilin Province, in Northeastern China, is living with a mounting debt. His wife left for South Korea six months ago and he hasn’t heard from her since. He starts gambling to make money but always ends up losing.

One day, Gu-nam is offered a job that will pay off all his debts. The job is to assassinate someone in South Korea. He takes the job without knowing much about his target and to see his wife. But when he arrives in Seoul, he ends up being chased by the police because he is wanted for a murder that he did not commit. Gu-nam is starting to realize that he has been tricked into a dangerous trap. But the police aren’t the only ones looking for Gu-nam. Myun-ga (Kim), a professional assassin who also lives in Yanbian, is sent to Seoul to look him as well. Gu-nam has two choices: solve the mystery of who hired him and why Myun-ga is after him by himself or end up in jail for the rest of his life.

“The Last Station” is the story of famous Russian novelist Leo Tolstoy (Christopher Plummer) and the problems he has trying to maintain his frugal lifestyle later in life.

As he gets older, Tolstoy becomes the de-facto leader of a movement that emphasizes pacifism, frugality and sexual abstinence.

But that’s a problem because Tolstoy’s wife (Helen Mirren) wants his writings and inheritance after he dies, his trusted follower (Paul Giamatti) is so fervent about the Tolstoyan cause that he’s convinced the writings should go to the Russian people, and a good-natured assistant (James McAvoy) gets caught in the middle of this drama-comedy that shows that no matter how committed people might be on the surface to living the Tolstoyan way, they are still corrupt and ready for violence - the exact opposite of Tolstoy’s vision.

Mirren and Plummer were nominated last year for best-actress and best supporting-actor Oscars, respectively, for their performances in this film directed by Michael Hoffman.

While many people know the story of The Doors, a rock band that gained prominence in the United States in the 1960s and ’70s, “When You’re Strange” - directed by Tom DiCillo and narrated by Johnny Depp - combines exclusive footage of the band with a straightforward narrative that both fans of the band and newcomers alike can enjoy. The documentary follows The Doors as they rose to fame, became the poster band for controversy in the era and ultimately experienced a tragic end when lead singer Jim Morrison mysteriously died in Paris in 1971. 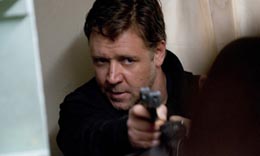 “The Next Three Days” has a stellar resume on paper: Russell Crowe plays the lead alongside a glamorous Elizabeth Banks, Liam Neeson has an instrumental role, and the film is written and directed by Paul Haggis - the Canadian-American behind two Best Picture Oscars, “Million Dollar Baby” (2004) and “Crash” (2004).

Yet for all of its promise, “The Last Station” never quite reaches the summit, but instead offers an overly pedantic story line of a Prius-driving literature teacher at community college (Crowe) who (over-)meticulously plans a prison break to free his incarcerated wife (Banks), who has been found guilty of murdering her boss.

When his family is shattered by the sudden arrest of his wife, Crowe’s John Brennan embarks upon a near-scholarly pursuit of freeing Bank’s Lara Brennan, ignoring the compelling evidence against her and the fact that her appeals have all been rejected. Crowe’s character turns to the Internet and books and interviews Neeson’s Damon Pennington, who somehow managed to break out of seven prisons during his life and lived to write a book on his exploits.

Guns blazing and sirens blaring, Crowe, as he’s wont to do, transforms from a mumbling brooder into a violent mumbling brooder. In the end, there’s enough suspense and cleverness to warrant a watch, but don’t expect anything to write home about.