Finding that age is ‘nothing but a number’

Finding that age is ‘nothing but a number’ 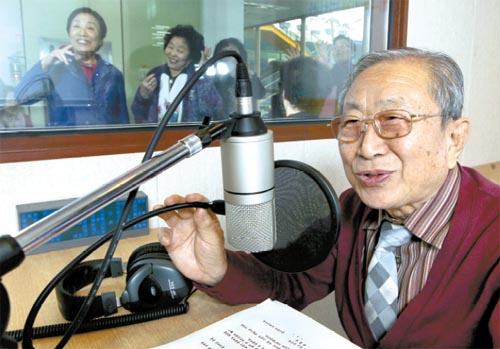 Cho Yong-seo, 83, started a new chapter of his life as a D.J. of a radio show at the Senior Welfare Center in Seoul. By Choi Seung-shik


Cho Yong-seo, 83, is living a life of excitement, and with it, proving that the old stereotype of the elderly depending on pensions after retirement and leading boring lifestyles can be thrown out the window.

Many people in their 70s and 80s now are starting new careers, getting face lifts to look younger and experiencing fun activities like horseback riding.

So, for Cho, who started a radio show called “Radio Silver Star” two years ago at the Senior Welfare Center in Seoul, it’s a whole new world. On Dec. 5, for example, the DJ got all the older women outside the studio dancing to a tune by veteran trot singer Song Dae-kwan - something that would have been unthinkable even 10 years ago for an 83-year-old man.

Formerly a corporate man who worked in Japan and Saudi Arabia, Cho hosts his 30-minute show three to four times a month. Cho retired at 55 but he used his Japanese language expertise to start a small Japanese trade company, which he ran for 20 years.

The radio show is purely on a volunteer basis, but Cho said he’s finding another side of himself he’s never experienced before.

“I love new challenges and I enjoy them,” Cho said. “I’m taking the example of seniors in their 90s who try to live young and healthy.”

Advanced medical technology has helped a growing number of people live longer lives, and senior citizens like Cho are eager to take up new challenges in their later years. Some learn how to use online social-networking sites such as Facebook and Twitter, while others take courses to improve their English.

“In the past, many people thought they were awarded a bonus life when they lived longer than 80,” said Cho Joon-mo, an economics professor at Sungkyunkwan University. “So many senior citizens around that age were normally looked after by their children. Now they’re engaging in productive activities.”

Kang Jae-heon, a professor at Inje University Paik Hospital, said senior citizens these days are very health conscious and they are getting surgery to improve their health, ranging from ankle joint surgery to dental implant surgery. And some are even getting Viagra, a drug that corrects erectile dysfunction.

“More seniors are willing to ‘repair the components of their body,’” Kang said. “Just several years ago, many opted to pass over minor illness, but things have changed. This is because many value the importance of living longer in healthy conditions.”

Kim Il-soon, president of Korea Golden Age Forum, a group that represents the elderly and advocates for senior-friendly policies, said the Korean government should come up with policies better tailored to variations in the lives of elderly people.

“It’s not desirable to have welfare policies based on people’s age,” Kim said. “While there’s a man in his 60s who needs welfare benefits, there’s also a man in his 80s who doesn’t even need that. The number of healthy and financially-stable seniors is growing in this country, and the government should re-examine its policies to benefit needy seniors, not affluent ones.”

Kim said his alma mater, Yonsei University, used to host an event marking graduates’ 25th anniversary, but the event was changed to celebrate the 50th anniversary.

He also said that 78 percent of graduates survive until age 75 and many are busy enjoying such fun activities like tennis and horseback riding. According to international studies, Kim said, people in their 80s have the highest happiness index.

Said Cho: “Age ain’t nothing but a number.”