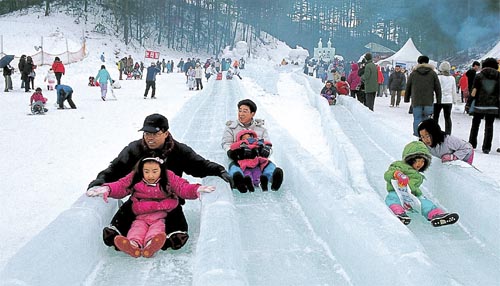 Visitors ride on ice slides at the Daegwallyeong Snow Festival


PYEONGCHANG - With the winter season in full swing, it’s easy to stay holed up inside, away from the frigid temperatures. But there are plenty of reasons to head outdoors for the weekend, and the mountainous region of Pyeongchang, Gangwon, offers a multitude of sporting events, festivals and outdoor activities.

Located 700 meters (2,297 feet) above sea level, Pyeongchang and its surrounding areas average 250 centimeters (98.4 inches) of snowfall and a temperature of minus 6 degrees Celsius (21.2 degrees Fahrenheit) during the winter months. At roughly two and a half hours from Seoul, or about 200 kilometers (124 miles), Pyeongchang is a relatively short distance from the capital, making it an ideal destination for a weekend getaway.

This year, sports fans are in for a treat as Pyeongchang will host two international winter sporting events - the International Ski Federation (FIS) Ski Jumping Continental Cup (Jan. 11 to 13) at Alpensia Resort and the FIS Snowboard World Cup (Feb. 7 to 9) at Yongpyong Resort. 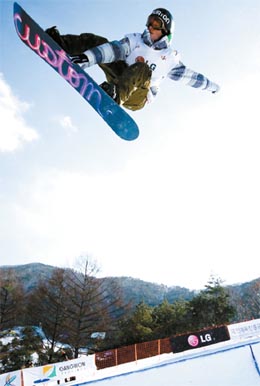 A competitor competes in the 2009 FIS Snowboard World Championships

The upcoming Ski Jumping Continental Cup will feature 50 athletes from 13 nations including four Korean ski jumpers. It’s the second consecutive year that the event has been held in Pyeongchang.

Both the Alpensia and Yongpyong resorts are at the heart of Pyeongchang’s bid for the 2018 Winter Olympics.

“The hosting of major winter sporting events is being done to improve our ability to hold large-scale sporting events in Pyeongchang in preparation for the 2018 Winter Games bid,” said Lee Man-ki, director of media relations for the 2018 Pyeongchang Winter Olympic Bid Committee. “We had a very favorable review on our hosting of the event and the facilities from FIS officials last year.

“The Ski Jumping Continental Cup was held in September last year and with this year’s event being held on snow, we’re hoping for a bigger turnout, despite the chilly weather,” Lee said. Last year’s summer event used artificial turf and water on the ramp, instead of snow.

Pyeongchang has held several successful international sporting events in the past, including the World Cup Alpine Skiing Championships in 1998 and 2000, the Winter Asian Games in 1999, the FIS Ski Jumping Continental Cup in 2009 and the FIS Snowboard World Championships last year.

Yongpyong Resort opened to the public in 1975 and has since established itself as one of the top draws for skiers and snowboarders from novice to expert level.

“Yongpyong is relatively close to Seoul so I try to go there as much as I can when there are reports of heavy snowfall in the area,” said Park Jung-soo of Seoul. “After having learned how to snowboard last year, I will definitely check out the world-class competition at the Snowboard World Cup in February.” 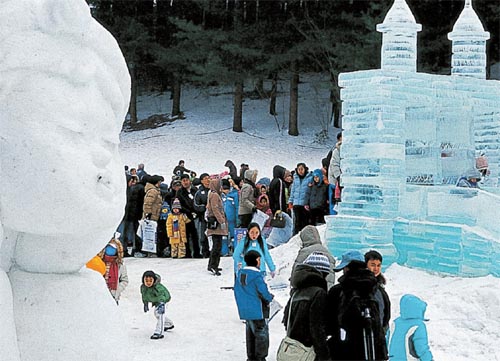 Visitors take in snow sculptures at the snow festival


Alpensia Resort, which opened last year, is much smaller in scale than Yongpyong and is home to a world-class ski jump tower and cross-country course. Alpensia Resort has hosted the 2008 Biathlon World Cup, 2009 Biathlon World Championships and the 2009 Ski Jumping Continental Cup. In addition, Alpensia has a total of six slopes ranging from beginner to expert levels for skiers and snowboarders.

“We chose to come to Alpensia as part of our four-day trip to Seoul,” said Juliana Chen, who was visiting from Hong Kong with her daughter. “It’s a new resort and a friend of ours recommended the place to us. We saw the ski jump tower and it looks impressive. Since the resort is new, some of the services don’t yet seem up to par but we are enjoying ourselves.”

Choi Tae-yeol, a local taxi driver, talked about the resort’s clientele and how it differs from that of Yongpyong.

“Alpensia Resort is open all year round, but with its smaller slopes and high costs, a majority of the visitors are from overseas,” he said. “Being so close to Yongpyong, the resort doesn’t seem to draw as many local visitors as people expected.”

The area will also be home to an annual National Winter Sports Festival featuring the very best domestic and overseas Korean athletes from Feb. 15 and 18. 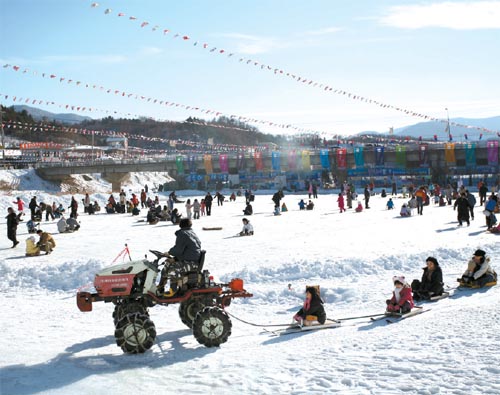 Participants ride on sleds pulled by an all-terrain vehicle at the Pyeongchang Trout Festival. Provided by Pyeongchang County


Festivals to kick off a festive season

There’s more to Pyeongchang than skiing and snowboarding. Two winter festivals will take place in the area starting next week.

The fourth edition of the Pyeongchang Trout Festival - the first of the winter festivals in the area on the calendar - kicks off on Dec. 23 and continues through Feb. 17 along the Odae Stream in Jinbu-myeon, Pyeongchang. The family-oriented festival is ideal for active people seeking outdoor winter activities.

At the heart of the festival is ice and lure fishing for trout. Visitors can rent all the fishing equipment on the spot and have their catch prepared at a nearby restaurant. Visitors have the option of having their trout prepared as hoe (raw) or gui (grilled).

Aside from fishing, festivalgoers can participate in other winter activities, such as sledding, snow rafting and dog sledding, as well as skating and rides on all-terrain vehicles.

Another winter festival in the region is the Daegwallyeong Snow Festival (Feb. 12 to 20). Held in the Hwenggye-ri area of Pyeongchang, festival organizers are expecting a total of 300,000 visitors this year. One of the highlights of the festival is the snow sculptures - 26 in all - measuring three meters long and three meters high.

Festival organizers will also have a team of 14 sculptors work on what is expected to be the world’s biggest snow sculpture between Jan. 15 and 23. When complete, the massive creation will be 70 meters long and 15 meters high. A snow sculpting competition for university students will be also be held from Jan. 8 to 13.

The most intriguing event of the festival is the Nude Marathon on Jan. 16 at 2 p.m. Despite its name, participants do not actually run the race naked, but they do run it in their underwear. There are two courses of 5- and 10-kilometers. The festival also offers plenty of delectable food, outdoor activities and performances.

For more information on the festivals, visit http://visitkoreayear.or.kr. 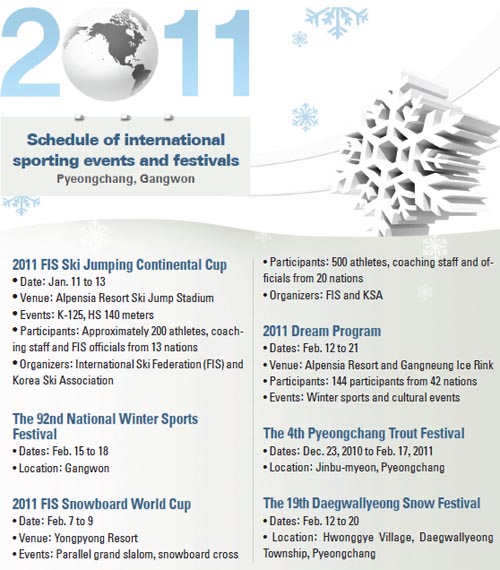 Visit Korea Year offers free shuttle buses for visitors to the Gangwon region every day except on Mondays. The shuttle buses depart from Gwanghwamun, central Seoul, at 8 a.m. and arrive back in Seoul at 9:45 p.m. The bus stops at Alpensia and Yongpyong resorts in Pyeongchang and Gangneung. The free bus service is available until Feb. 25 and reservations are required. For more information, call (02) 1577-2507 or visit http://english.visitkoreayear.com.

A taxi ride from the Hwenggye Bus Terminal to Alpensia Resort or Yongpyong Resort costs roughly 8,000 won to 10,000 won.

The Dong Seoul Bus Terminal is located next to Gangbyeon Station, line No. 2.