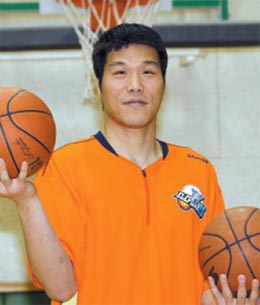 Seo Jang-hoon is averaging 16.5 points per game this season. By Lee Ho-hyeong

While the offseason additions of Moon Tae-jong and Shin Ki-sung have been huge for the Incheon ET Land Elephants, the central figure of the team remains veteran center Seo Jang-hoon.

He has career averages of 20.3 points and 8.3 rebounds per game.

The 38-year-old is averaging 16.5 points and 5.4 rebounds per game this season. And while it is only natural for big men to experience a big dip in scoring and rebound averages in the latter stages of their career, Seo still remains one of the top centers in the league.


Q. Many people say you seem rejuvenated this season. What is your take?

A. I wouldn’t say there is a big difference in the way I play or the manner in which I approach games. Although I produced points and rebounds last season, we lost many games. I think now that we’re winning games, there are people who are complimenting my game.

Wouldn’t you say that continuing to produce at a top level despite getting older is impressive?

It’s true that it gets harder to produce as you get older. But being mentally strong can make up for a decrease in cardio. Some say a strong having a good mentality is useless when you are not in top physical shape, but I disagree.

What is your secret to being a consistent player?

This is my 13th season in the league. I’m a bit more aware as to how to take care of my body now. I always follow a strict routine a day before the game. I eat and sleep at exact intervals and I stay away from doing anything that may be a distraction.

I also take an afternoon nap on game days. This is the only way I can maintain my top physical condition during games.

What are some of the weaknesses of ET Land as a team?

We’re like an expansion team. Compared to last season, roughly 70 to 80 percent of our roster has undergone change.

It will take a bit more time for us to click on all levels and to find our own style of play. We need to remember to stay level-headed. If we start to get complacent at this point in the season, it can become difficult for us to win the title.

We need to approach the rest of the season with the right mind-set and continue to challenge ourselves.

You have been consistent over a span of 13 seasons. Do you have any regrets?

I have yet to average over 20 points since. Scoring average is directly related to the number of minutes you play in a game. I used to play 40 minutes in games. (When) my playing time dropped to around 30 minutes per game, my scoring average took a slight dip.

I’m not even averaging 30 minutes per game this season but people are complimenting me on my game. This hurts my pride a bit. I feel that I can still play an entire game.

You hold many records, but which record are you most fond of?

I would have to say scoring and rebounds. I don’t know when I’ll retire from the game, but I think it will stand for years to come. It might be possible for someone to break the record if he produces at a consistent level for 20 years.