When teachers instruct students to skip a test

When teachers instruct students to skip a test 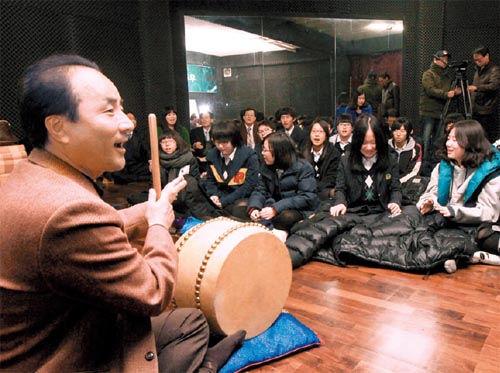 
To test or not to test? That was the question for Korean middle schoolers this week.

The National Assessment of Students’ Academic Performance was scheduled to take place Tuesday. But middle school students in Seoul and four provinces were exempted from the annual exam because their local education chiefs don’t approve of it.

In Seoul, education superintendent Kwak No-hyun designated Monday to Friday “The Week for Creativity and Personality Education,” and encouraged schools to take students to museums, theaters, galleries, libraries and gyms - in other words, do anything but sit in classrooms taking the national test. Kwak also arranged a series of lectures for schools by athletes, novelists and former and incumbent ministers.

Five education offices run by liberals - Seoul, Gyeonggi, Gangwon and North and South Jeolla - cancelled the twice-yearly exam. The rest of the country took it. The education superintendent of Gwangju, Jang Hwi-guk, allowed schools to choose whether to administer the tests. Out of 86 middle schools in Gwangju, 26 held the exam.

The one-day test, which measures competence in basic subjects like Korean and mathematics, has pitted education chiefs against some teachers and the Ministry of Education, Science and Technology. The tests were started in 2008 by the Education Ministry to “better understand which factors impact academic ability and thus assist school efforts to raise student performance levels,” according to a policy plan released by the ministry.

However, liberal education administrators and teachers - traditional supporters of opposition parties - dislike the compulsory test and say that students should have the right to decline to take it. After the local elections in June, many education offices became controlled by liberals. A Seoul education office official said that education in Korea has become too stressful and competitive and should “change its direction toward preparing for the future’s society.”

“Following the policy of the education office, we did not take the academic ability test,” said principal Yun Jae-seong. “Although academic scores are important, artistic activities give students significant accomplishments.”

Some principals in Seoul bashed the policy. “The academic ability test plays a crucial role in drawing up a course plan for the next year,” said a principal of a school in Yangcheon District. “The education office should let schools use their discretion like Gwangju.”

“It is not desirable in terms of education to see students being divided due to the ideologies of education superintendents,” said Lee Seong-ho, professor of education at Chung-Ang University. “The disparity of academic ability is likely to be widened.”