Last week, the ROK Army underwent a nine-week retraining session under the direction of Gen. James Van Fleet, an affable man who drew on his experience as a football coach in Florida to prepare the troops.

An aerial view of Panmunjom from the book “Korean War in Color” by former NBC correspondent John Rich and published by Seoul Selection. What started as several makeshift barracks in a small village grew in size over time. The armistice talks that began in early July 1951 would take roughly two years to finish.


Gen. James Van Fleet played an instrumental role in helping the ROK Army because of his decision to retrain and overhaul certain aspects of the South Korean fighting force, we were now getting closer to being able to defend two-thirds of the entire ROK-U.S. defensive line.

After our last clash with the Chinese People’s Liberation Army, things at the defensive line had come to a lull. President Syngman Rhee and Minister of Defense Lee Ki-bong both came to Gangneung for visits and went away pleased with the progress of the ROK Army.

In July of 1951, General Van Fleet also paid a visit with an icebox full of beer and sandwiches. I was surprised by his unexpected visit and General Van Fleet merely said he was in Gangneung to enjoy a day on the beach. Adm. Arleigh Burke happened to be in the area at the time and the three of us went to the shore.

But an unfortunate event nearly ensued. Knowing that General Van Fleet loved good food, I told him that the ice cream on the U.S.S. Los Angeles (CA-135) was excellent and suggested that the general try some. General Van Fleet, along with Admiral Burke, took a helicopter to the ship but the trip took a lot longer than I expected.

When they returned, General Van Fleet looked shaken. I was told that the waves were high that day and although it was dangerous for the chopper to land on the ship, they tried and nearly crashed on the deck.

I was just as shaken to hear that two notable commanders in the U.S. military nearly died because of my suggestion that they try some dessert.

Later in the day, General Van Fleet suddenly asked me if I spoke Chinese. I replied that there were different dialects and that I spoke passable Mandarin. 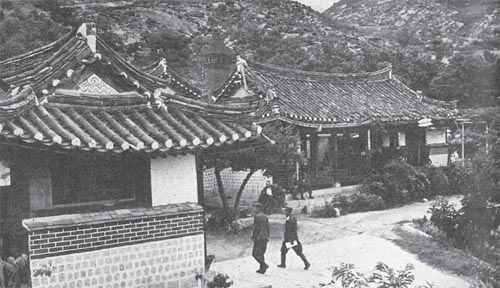 North Korean generals are seen entering Naebongjang in Kaesong, North Hwanghae, where the first armistice talks between the communist and allied forces began on July 10, 1951. Provided by the U.S. Army


After General Van Fleet’s departure, Admiral Burke paid another visit and told me that he would be going to Japan for a brief visit. After speaking with Admiral Burke, I got the sense that a big change was in store for us.

My intuition was right. I received a call from Gen. Lee Jong-chan, the ROK Army chief of staff, a day after General Van Fleet’s visit.

“Armistice talks are set to take place soon and you have been selected as the Korean representative,” General Lee told me over the phone. “The request was made by the United Nations, so I want you to head down to Busan and brief the president.”

Although I was told that the request had come from the United Nations, it was General Van Fleet had who made the recommendation. By holding cease-fire talks that would include PLA commanders, he felt it necessary to have a representative on the allied forces’ side who could communicate in Chinese.

I began to doubt if truce negotiations were the best option for the allied forces to take, but nevertheless proceeded to make my way down to Busan on July 8, 1951. When briefed on the latest turn of events, the president did not seem pleased.

“I strongly oppose a military armistice at this point,” the president told me. “We need to work to unite Korea. We would be dividing our own country in half if we stopped now.”

Up until the final agreement was reached in 1953, Rhee strongly opposed an armistice. He felt we needed to drive out the communists and unite Korea. He would later clash with U.S. commanders and Washington over this on several occasions.

I was the commander of the ROK 1st Corps on the front lines and it felt a bit strange for me to suddenly have to attend a meeting about an armistice. I was given the order to attend the cease-fire talks but I had my reservations. The president told me that it would be best for me to attend the talks as a sign that we were cooperating with our allies. 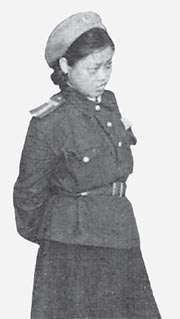 A female North Korean soldier who was at the talks in Kaesong.

I made my way to the ROK Army headquarters and briefed General Lee on my visit to Busan, then I headed to Munsan, Gyeonggi. This was where the ROK 1st Division and I had our first battle against the North Koreans. We also defended the area again when the PLA made its way south. So it was with a heavy heart that I returned to Munsan to participate in the armistice talks with the enemy.

From what I experienced in the past, the Chinese and North Korean communists were not easy opponents to deal with. They were great at psychological tactics, looking for any weakness in their opposition, latching on to shortcomings and using it to their advantage. To have to put aside our guns and engage in mind games with the enemy seemed like a daunting task for me at the time and I was sure it would turn out to be a long and difficult process.

Tents housing armistice-talks participants were set up in an apple orchard in eastern Munsan, and it became known as “Peace Camp.”

The suggestion to hold armistice talks came from the Soviets on June 23. Gen. Matthew Ridgway agreed and chose Munsan as the location on June 30.

But on July 1, the PLA suddenly suggested the location be changed to Kaesong, North Hwanghae, and the allied forces complied. I think the reasoning at the time was that many of the allied forces’ commanders thought that the talks would not last more than 10 days. I tried to tell them that we would not be able to reach an agreement with the communists easily, but no one seemed to listen.

The communists under Kim Il Sung’s command had proven to be difficult to deal with and the cases I studied in books only reaffirmed my doubts about them.

The talks took place at a sprawling property called Naebongjang in Kaesong. The main building was a hanok, or traditional Korean house, containing a total of 99 rooms. It was said to have belonged to a wealthy yangban, or aristocrat, in the area. It was a beautiful place but half the property had been damaged during the war and the roof of the main housing unit had been partly destroyed.

Talks started in the morning on July 10, 1951, with five communist generals and five generals from the allied forces.

Participating allied commanders were shuttled from Munsan to Kaesong by helicopter.

Lt. Gen. Nam Il, the North Korean chief of staff, was the head representative on the communist side, which consisted of three North Korean and two PLA generals.

They were seated on bigger chairs while we were given smaller chairs, hence the perception that we were looking up at our opposition. The flags placed on the table were also of different sizes, with the North Korean and the Chinese flags bigger than the South Korean and U.S. flags.

The talks began coolly without any greetings or small talk. The U.S. generals expressed our intention to continue the battle while also holding talks.

The way I saw things, it didn’t really matter what we said to the communists because they probably would have continued to seek battles to gain an edge in the war anyway. The U.S. generals’ boldness and the communists’ psychological tactics were bound to come to a head-on clash.