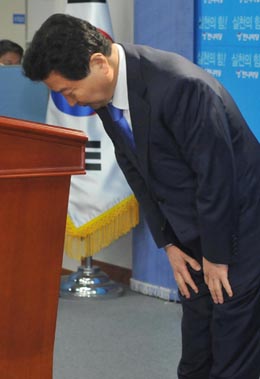 The leader of the ruling Grand National Party apologized yesterday for recent sexist remarks amid calls for his resignation from rival party members.

Ahn Sang-soo, GNP chairman, came under fire last week for saying that male visitors to hostess bars prefer girls with natural beauty over those who have had plastic surgery.

“I am solely to blame,” Ahn said during a press conference at the party’s headquarters in Seoul. “While reflecting on my mistake over the past several days, I felt heavy responsibility as leader of the ruling party.”

“I am deeply sorry for causing great concern [to the people] in such difficult times with my remarks and mistakes unbefitting a ruling party leader,” Ahn said, pledging to work hard to revive the economy and improve the living conditions of ordinary people.

Rival party members insisted on Ahn’s resignation, saying an apology is not sufficient.