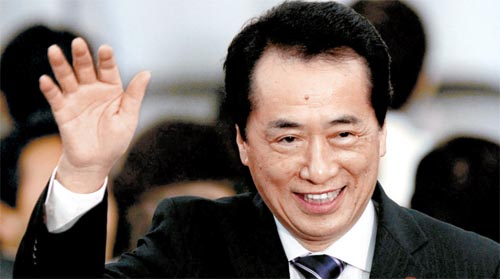 
Naoto Kan, Prime Minister of Japan, said China should be a responsible member of the international community in a written interview with the JoongAng Ilbo on Thursday. He said he supports the South Korean government's response to the attacks by North Korea, while emphasizing the importance of keeping tensions on the peninsula from escalating.


Q. What is Japan's response to North Korea's recent shelling of Yeonpyeong Island?

A. I want to express my condolences to the victims and bereaved families once again. This attack was an act threatening not only South Korea but the peace and safety of Northeast Asia. I urge North Korea not to resume acts like this. Japan is closely cooperating with South Korea and the United States and asking Russia and China to exert influence over North Korea.

In case of an emergency on the Korean Peninsula, what kinds of discussions are the Japanese government having with South Korea and the United States to ensure the safety of Japanese residents in the South?

Ensuring the safety of overseas residents is one of the important tasks of the Japanese government. Japanese government offices need to check the political situation [on the Korean Peninsula] constantly, in an effort to protect our people [in the case of emergency]. At this point, we are talking about this with the U.S.. In the future, I hope we will have discussions with South Korea about security issues, such as saving Japanese nationals in South Korea.

The South Korean government has said that it will strike North Korea if the South is attacked again. Do you agree with this?

I think the South Korean government will take the proper action based on the situation. Japan will also keep an eye on [North Korea], as we also have a deep interest in peace and security, not only on the Korean Peninsula but in the Northeast Asian region.

Do you think North Korea will fire on Japan in the future?

I am strongly determined that Japan protect the lives and property of its people. I see the [North's] missiles as a big threat. Japan and the U.S. will strengthen ties and continue close cooperation.

The return of Korea’s royal books, including “Uigwe,” this year has been delayed. Will it be possible to discuss this matter at a regular session of the Diet early next year?

We were supposed to discuss returning the royal books at an extra legislative session this year, but unfortunately, the matter will be discussed in next year's regular session. We will make an effort to return the books to South Korea as soon as possible.

You released a statement in August apologizing for the suffering of Koreans during the 1910-1945 colonial period. Why did you release the statement and what is your hope for the next 100 years of relations between Korean and Japan?

I made the statement because I wanted to build a future-oriented relationship between our two countries, expressing regret for what we did without focusing on the past. When it comes to the future of the bilateral relationship, I think the people of the two countries have already built a foundation by interacting with each other naturally and honestly.

It has been five years since discussions on the Korea-Japan free trade agreement were suspended. What do you think about this?

The Democratic Party of Japan has been enthusiastic about granting political rights to foreign nationals. But these days the party is keeping quiet on the issue.

When it comes to this matter, there are various opinions [in Japan] because it is related to national policy. We should get the consensus of [the Japanese] people first and then the matter should be discussed in the legislature, local governments and so on.