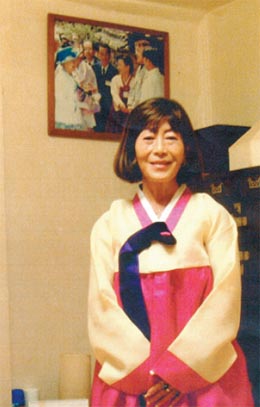 Eriko Tanahashi was so inspired by the Korean Wave that she visited Korea often and studied its culture and language. Provided by Hinato Tanahashi

After Eriko Tanahashi’s husband died in 2005, the 58-year-old mother of three got swept up in the Korean hallyu, or wave, of television soap operas and other cultural exports.

From her home in Kanagawa Prefecture, Japan, she became smitten with actor Ryu Shi-won, a star of her favorite serial, and started making visits to Korea. She even began studying the Korean language.

Last December, Tanahashi’s three daughters sent her on another trip to Korea as a Christmas and birthday treat. She arrived in Seoul on Dec. 28, 2009.

And then Tanahashi disappeared into the Korean Wave. She was last spotted alone in a restaurant in Gangwon on New Year’s Day of this year. Two hours after that meal, she sent photos of Ryu Shi-won to a friend in Japan via her cell phone.

After that, Tanahashi vanished without a trace. Korean police don’t have a clue whether she was kidnapped, murdered, committed suicide, has amnesia, or was the victim of an accident. They say Tanahashi’s case is completely cold.

But her daughters are still trying to find their mother.

“My mom did love Korea from the bottom of her heart,” said Hinato Tanahashi, 28, Eriko’s third daughter. “If a story of my mom and picture are published in a Korean newspaper, wouldn’t there be a slight chance of getting new information?”

According to the daughter, her mother fell in love with Korea through broadcasts of “Winter Sonata” in 2003, which was a huge hit with middle-aged women throughout Japan.

After she lost her husband in 2005, Tanahashi joined Ryu Shi-won’s fan club and traveled to Korea seven or eight times with equally enthusiastic friends. In order to watch Korean soap operas in the vernacular, she started studying Korea’s language and dug into its culture as well.

When she arrived in Seoul on Dec. 28, 2009, Tanahashi checked into a hotel in Cheongdam-dong, Gangnam, in southern Seoul, where she stayed for the next three days and had a reservation through Jan. 4.

She told the hotel she was planning a trip on Jan. 1 to Chuncheon, where some of the most iconic scenes in “Winter Sonata” were filmed, and asked about transportation. She left the hotel on New Year’s Day but didn’t check out and kept her room.

When Tanahashi failed to return home to Japan on Jan. 4, her family reported her missing to a local police station.

The Japanese Embassy took up the case, and the Gangnam Police Station launched a full-fledged investigation with 40 detectives working three months.

They found a witness who saw Tanahashi on Jan. 1 at the bus terminal in Gangneung, on the eastern coast of Gangwon, far from inland Chuncheon, her stated destination.

Another witness saw Tanahashi eating dinner alone at a restaurant in Jumunjin, a coastal town in Gangneung, at around 7 p.m.

At around 9 p.m., Tanahashi sent photo files of Ryu Shi-won to a friend in Japan via her cell phone.

No more clues were found.

Tanahashi’s three daughters came to Korea in March to search for their mother and visited the Gangnam hotel, a Gangnam bus terminal, the Jumunjin restaurant and also hospitals in Gangwon, to no avail.

“We considered all possibilities including suicide, an accidental death and crimes,” said an officer of the Gangnam Police Station yesterday. “The weather conditions in Gangneung on Jan. 1 were very bad so there’s a possibility she was met with an accident on the seashore.”

The police seriously considered suicide because Tanahashi seemed to be behaving oddly. At the restaurant in Jumunjin, she was reported to have stared into space without noticing her stew boiling down to nothing.

The police collected a sample of Tanahashi’s DNA from her toothbrush in the Gangnam hotel and sent it to the National Forensic Service.

It is being compared to every unidentified body found, but so far there hasn’t been a match.

Tanahashi’s daughters, however, dismiss the idea of their mother committing suicide.

“She was close like a sister to us,” Hinato Tanahashi told the JoongAng Ilbo. “I don’t think she would have committed suicide without leaving us a farewell note.”

The daughters say they continue to have hope of finding out what happened to their mother as she pursued her love affair with Korea.