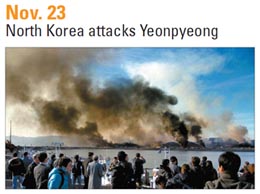 At 2:34 p.m. on Nov. 23, North Korean shells started raining down on Yeonpyeong, an island in the Yellow Sea that is home to a Marine base, in the North’s first attack on land or on civilian territory since the end of the 1950-53 Korean War.

By the time the barrage ended 67 minutes later, two civilians and two young soldiers doing compulsory military service were dead, numerous homes and other structures were destroyed, and most of the island’s residents started fleeing to the mainland.

The attack caught the military and government off guard and the South’s counterattack with artillery from Yeonpyeong was weak because only three of the six howitzers functioned properly. Minister of National Defense Kim Tae-young resigned.

In the aftermath, the government said it would rewrite the rules of engagement and respond with much greater force to any further attack by the North. South Korea held massive drills from Yeonpyeong and near the land border, which prompted threats of retaliation that Pyongyang never fulfilled. The drills were protested by China and Russia, even resulting in an emergency meeting of the United Nations Security Council.

2.Sinking of the Cheonan 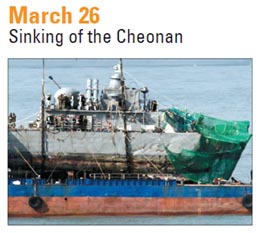 On March 26, the Navy corvette Cheonan burst in half and sunk in waters off Baengnyeong Island near the inter-Korean maritime border, killing 46 of the 104 sailors on board. Circumstantial evidence, backed later by a multinational investigation, pointed to a North Korean torpedo attack as the cause, raising inter-Korean tension to its highest level in decades.

Naval skirmishes aren’t rare near the Northern Limit Line in the Yellow Sea, a de facto maritime border not acknowledged by North Korea. But a clash that killed so many sailors was unprecedented since the Korean War.

The North vigorously denied its involvement and claimed the South and the United States fabricated the evidence. Seoul referred the issue to the United Nations Security Council, but because of adamant opposition by China and Russia to a reproach of Pyongyang, the UNSC issued a chairman’s statement in July that condemned the attack but not the North.

In the aftermath of the tragedy, the military’s response was found to be confused and mendacious - the chairman of the Joint Chiefs of Staff admitted to drinking heavily that night and was forced to resign - and President Lee Myung-bak ordered military reform to improve defenses against the North. 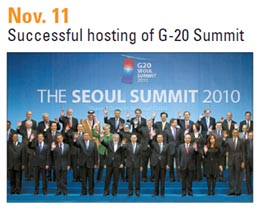 The two-day Group of 20 Summit in Seoul concluded on Nov. 12 with leaders of the world’s major economies fending off a threatened currency war and rising protectionism.

President Lee Myung-bak brokered a temporary truce as leaders agreed to come up with “indicative guidelines” by June 30, 2011 to assess and correct current account imbalances that had fueled a round of competitive currency devaluations by some of the world’s leading economies.

They also consented to move toward market-determined exchange rates that reflect economic fundamentals. However, by postponing a compromise on setting the guidelines, world leaders left the door open to further disputes.

Korea’s main initiative of creating a global financial safety net, which calls for a system of multilateral credit lines to provide emergency funds to crisis-hit countries, will be developed and discussed at next year’s G-20 meeting in France. 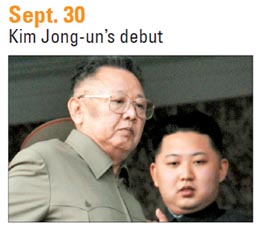 Kim Jong-un, the youngest son of North Korean leader Kim Jong-il, was named his father’s successor in September after months of speculation in the media.

One of the most closely guarded secrets of the North Korean regime - and probably the most sought after piece of information by outside observers for many years - has been who would take command after Kim Jong-il.

For many, his first son Kim Jong-nam had been a likely candidate to succeed to the Kim family throne. But Kim Jong-un, believed to be in his late 20s, came out on top in September, when he was given high-ranking posts in the military and North Korea’s Workers’ Party.

Jong-un’s position as successor was solidified in October when he was shown by the state’s official broadcaster during a rare convention of the Workers’ Party and making his first public appearance - alongside his father - observing a military parade for the party’s 65th anniversary.

Kim Jong-un has made continued appearances in the state media on field guidance trips with his father, showing a regime that is occupied with grooming the young heir to become the next leader. 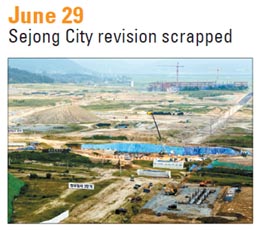 The Lee Myung-bak administration’s plan to turn Sejong City into an industrial, science and education hub was killed by the National Assembly on June 29. With the legislature’s rejection, Sejong City will become a new administrative region for government offices, as envisioned by Lee’s predecessor, Roh Moo-hyun.

Lee’s plan to water down the Sejong City blueprint met fierce opposition not only from opposition parties but also some members of his ruling Grand National Party. A faction led by Lee’s rival Park Geun-hye made clear that it would support the original Sejong City plan, not Lee’s signature project. A total of 35 state agencies will be relocated to Sejong City by the end of 2014, the government announced on July 12.

Prime Minister Chung Un-chan told the nation on July 29 he would step down from his post after the Sejong City failure. A former Seoul National University president, Chung was named prime minister in September 2009 in a cabinet shake-up.

The 62-year-old Princeton-educated economist had been critical of Lee’s policies, but actively promoted his Sejong City plan. When Lee named Chung prime minister last year, Park loyalists worried that Chung was being groomed as Lee’s successor.