In inundated Pohang, snow is an unfamiliar foe

In inundated Pohang, snow is an unfamiliar foe 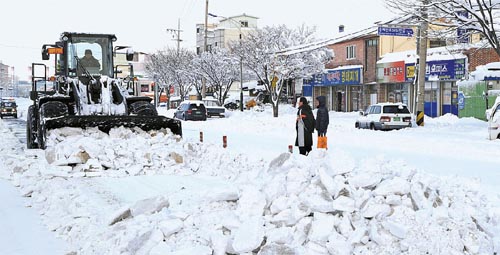 A marine drives a plow to remove piles of snow yesterday in Cheongrim-dong, Pohang, North Gyeongsang. The port city recorded snowfall of 28.7 centimeters (11.2 inches), the heaviest in 69 years. [YONHAP]


POHANG, North Gyeongsang - This port city on the southeast coast was blanketed with the most snow it has seen in 69 years and locals have had no idea how to get around in it.

Snow fell from early Monday through yesterday, totaling 28.7 centimeters (11.2 inches), the most since city officials started keeping track in 1942.

The highway connecting Pohang and Gyeongju was paralyzed, traffic authorities said, and it took more than three hours for drivers to reach Gyeongju, a trip that normally takes 30 minutes.

Most taxies in the city stopped operating and bus routes were cut. People living on the outskirts of Pohang had no bus service yesterday.

Bus driver Lee Jong-seok described an epic bus ride Monday: he departed the city center at 3:50 p.m. carrying about 70 passengers. Driving at 25-kilometers per hour, Lee passed through 60 centimeter snow drifts and was blocked at one point by an abandoned truck at the base of a steeply sloping road.

The bus and cars behind it couldn’t get up the slope. Police were called in to help the bus get over the slope, and it didn’t arrive at its final stop until 10:50 p.m.

According to Korea Airports Corporation, all flights in and out of Pohang Airport were cancelled until 4:50 p.m. yesterday and passengers were forced to take KTX trains.

In Donghae district, which got 52 centimeters of snow, about 1,700 greenhouses, or 30 percent of the greenhouses in the city, collapsed and about 1,130 tons of spinach worth 3 billion won ($2.6 million) were lost, said an official at Pohang city government.

Choe Hye-gyeong, who owns eight greenhouses, said: “My largest greenhouse, which is 3,000 square meters (32,291 square feet), collapsed and can’t be repaired. I have never seen this much snow in my life.”

The 50-meter roof of an outdoor fish market in the Jukdo area also collapsed under the weight of accumulated snow.

Pohang is the headquarters for Posco, the nation’s largest steel-maker, and the company couldn’t transport 40,000 tons of steel for two days because an interchange connecting a highway and the railroad was blocked.

“All the workers at factory were sent to clear snow from the frozen roads,” an official from Posco said.

“As we have seen very little snow in past years, we have scant equipment to clear snow,” a city official said. “We rented some from companies but it is still insufficient.”

With winds blowing from the northeast, the clouds moved toward the coastal cities of southeast of Korea, the state-run weather agency said.

“Temperatures will rapidly drop on Thursday,” the weather agency reported. “Officials of the city need to hurry in removing snow from roads and sidewalks.”