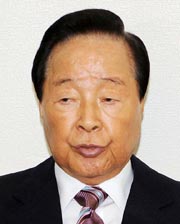 Former President Kim Young-sam said yesterday that he would bequeath his entire estate to society after he dies, including his house and properties in Geoje Island, South Gyeongsang.

In a New Year’s meeting with Grand National Party Chairman Ahn Sang-soo at the president’s home in Sangdo-dong, Seoul, Kim said, “Including some land on Geoje Island, I will donate all of my fortune to society [after my death]. I have already put my house [where I’m living now] on sale, and I have nothing [that I will give] to my children at all.”

“Everything finishes after [I] die and [no one can] live forever,” Kim added. “I thought I didn’t need to leave my estate for my children, and it would be better if I donate it.”

Kim will donate his home in Seoul and real estate in Geoje Island to the Kim Young-sam Center for Democracy, and will bequeath the house where he was born, also on Geoje Island, to Geoje’s city government and a local church, Kim said.

Ahn highly praised Kim for his decision, saying, “[Your donation] will become an inspiration for many politicians. I am sure you will live more than 100 years because you are really in excellent of health.”

Kim Jeong-yul, director of the Kim Young-sam Center for Democracy, said the center has already finished signing a contract with the president on the donation.

“We signed the contract on Nov. 15,” Kim Jeong-yul said. “Actually, the president has other land in Masan, South Gyeongsang, as well, and the center will receive his current house [in Seoul] and land in Geoje Island and Masan, all of which totals roughly 5 billion won [$4.4 million].”

The center, founded in June 2010 and funded with 20 billion won from the Lee Myung-bak government in 2010, is led by Kim Soo-han, former speaker of the National Assembly from 1996-1998, when the former president was in office.

The center said the president’s birthplace and adjacent land in Geoje Island will be given to Geoje Sinmyeong Church, which Kim’s grandfather founded behind the birthplace, and Geoje city government.

At the meeting, Kim harshly criticized the current political situation, especially altercations among lawmakers, by recalling the time when he served as a lawmaker.

“I feel ashamed about the current scenes in the National Assembly, for which the ruling Grand National Party has a great responsibility and should make more efforts [to fix the situation],” Kim said.

“It can’t be that lawmakers say things that should never have been said and hurl abuses at President Lee. It is so shameful that lawmakers speak such careless words,” Kim said. “When I was a lawmaker, we didn’t verbally abuse the president and respected him as the [nation’s] elder.”

Ahn responded, saying, “We feel sorry that incidents in the National Assembly are going too far these days. The Grand National Party will take care of what common people want by focusing on ... recovering the economy and creating more jobs.”