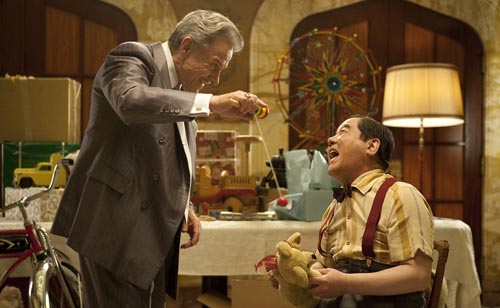 Shim Hyung-rae’s iconic character Young-gu is the secret son of a New York mafia boss in “The Last Godfather,” which has held the top spot at the box office in its second week. Provided by CJ Entertainment


Every Korean kid in the 1980s and 90s grew up watching Young-gu, a now-legendary fool with a trademark bald spot and runny nose who always tripped and stumbled. And in a tumultuous era when the nation was under military rule, the character provided relief from the daily stresses of life for all generations of television viewers.

Young-gu was such a strong part of the Korean consciousness that when Shim Hyung-rae, the comedian who plays him, pursued a career as a director, he had to fight back a wave of doubt from fans and colleagues alike.

His 2007 film “D-War,” which was his first foray into Hollywood, gave rise to doubts over its quality. On one Korean debate show, professors and culture critics locked horns over whether the film was an expensive flop that had resorted to nationalistic sentimentality to draw viewers or the greatest achievement in Korean film history with splendid computer graphics.

Now, Shim has drawn another barrage of criticism with his second Hollywood venture, “The Last Godfather,” which has Young-gu returning as the secret son of Italian mafia boss played by Harvey Keitel. Although critics have said the film falls flat because it is too obvious, “The Last Godfather” has held on to its top spot at the box office since it opened on Dec. 29, according to data from the Korean Film Council. 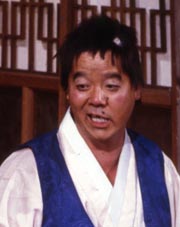 In “The Last Godfather,” Young-gu is trained to take over his father’s business. But with his broken English and slapstick comedy, it is clear from the start that he is going to have a difficult time of it.

The public may welcome Shim’s return, but he himself was worried about reviving a role he hadn’t played in more than 15 years. Shim said that at first he felt he was too old to do the ridiculous things his character does, but he eventually decided that if he matured it would be alright for the character to do so as well.

“Young-gu was described as an idiot in the past, but I tried to make changes to his outer appearance as well as his personality,” the 53-year-old director told the Korea JoongAng Daily. “Instead of being mad at the father who didn’t take care of him, I wanted to highlight Young-gu’s good side and show how much he appreciates the people around him and accepts them as his family. I felt good while I was acting as Young-gu because he is like an old friend.”

Shim made his directorial debut with “Young-gu and Princess Zzu-Zzu” (1993) and has appeared in countless films over the years, but it took years for him to be recognized as a serious director because of the impression Young-gu made on the public. And there are still some who refuse to see Shim as anything other than the iconic character.

Culture critic Jin Joong-kwon recently compared “The Last Godfather” to “inferior mass produced goods” on his Twitter page, saying that he hadn’t watched it nor did he have any intention to do so.

Despite the criticism, and the negative effect it has had on his career, Shim is quick to defend the character. “People look down on me or criticize me not because of Young-gu but because they are biased,” Shim said. “Young-gu makes mistakes but at least he doesn’t cause harm to others. Young-gu is me and he is a link between myself and the public.”

Meanwhile, Shim keeps challenging himself with new projects. His 3-D animated film “Memory of Bread” will be released this year and he is planning to produce a sequel to “D-War.”

“I hope many people enjoy my films. If they have fun watching them, that’s enough,” Shim said. “As long as there are people who root for me, I will keep making films and keep knocking on [Hollywood’s] door.”

The film, which is currently playing in theaters nationwide, does not yet have a U.S. release date.