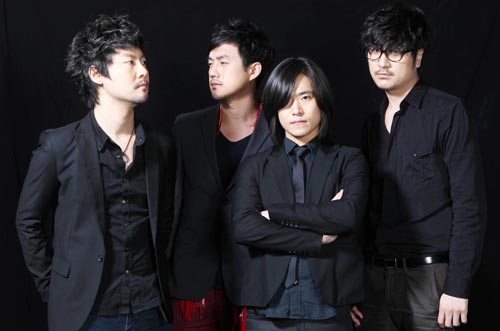 
Vodka Rain has long been a fixture in Korea’s burgeoning indie music scene, becoming known for its upbeat yet edgy rock style and heartfelt lyrics.

But its recently-released album, “Faint,” shows that the band has developed a more mature sound since its sophomore outing, perhaps because its members say that they are beginning to feel their age. (They are in their 30s.)

“As I get older, I keep forgetting things,” said lead singer Ahn Seung-joon. “Like this dream I had when I was a kid or the memories of when I was in love are all becoming very unclear. I wanted to hold on to all of those memories and put that into my music.”

Since their debut in 2005, Vodka Rain has based its music on members’ own experiences, crafting a sound that is more Brit pop than indie while also continuing to experiment.

The songs on its first album, 2007’s “The Wonder Years,” reflected the turmoil the band was going through as young artists in their 20s.

On its second album, 2008’s “Flavor,” the band tried an upbeat sound and seemed to be aiming for a broader, more mainstream, appeal.

But the new album is perhaps Vodka Rain’s most introspective. On it, Ahn sings about memory, longing and loss, leaving listeners with a feeling of emptiness after having lost something.

These feelings are echoed well in the music, which is bittersweet and slightly melancholic with the occasional injection of hopeful optimism.

The band was founded by Ahn and bass player Joo Yoon-ha, who were elementary school classmates. They were later joined by guitarist Lee Hae-wan and drummer Seo Sang-joon.

Together they write all of the material on their albums, with Joo composing the music, Ahn writing the lyrics and the other band members pitching in with ideas.

“The music has settled down a lot overall. Given the world we live in, we can’t just sing happy songs, right?” Joo said.

“Instead of music that everyone can enjoy listening to together, this album has songs that one can listen to by themselves at night during their alone time.”

From the first song to the last, “Faint” has the feel of a short story.

In the first song, the narrator says, “I am still here.” By track three he appears to be reminiscing about the past and lamenting that his “precious memories are slowly fading away.” In the seventh song, he remembers someone from his past, saying “I miss you, are you able to laugh without me?” In the last song he asks the person to “Please leave a few special memories.”

“Since the songs were created from an emotional place, the album became like a short story,” Joo said. “If you listen to the songs in order from the first track to the last, it will be easier to understand where we were going with the music.”

There are clues in the album’s title, though it seems more ambiguous than illuminating.

The band’s name has multiple shades of meaning as well. Although it calls to mind a dreamlike scene with a dark sky pouring vodka like rain, Ahn described it like this: “Just as vodka combines with other ingredients to make various flavored cocktails, our music also changes colors in various ways.”