The uniform makes the man’s army

The uniform makes the man’s army 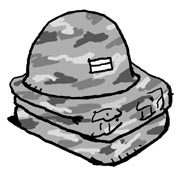 The uniform of the British Royal Horse Guards is said to be the oldest military uniform in use. It was created in 1485 by Henry VII, who opened the era of absolute monarchy in England after ending the War of Roses. Now, it is used just for ceremonial purposes, as seen in the wedding of Prince Charles and Princess Diana. The world’s most colorful uniform is the blue and yellow striped uniform of the Pontifical Swiss Guard of Vatican City.

The history of military uniform design dates back to the era of Greece and Rome in the West, and to the Spring and Autumn and Warring States periods in China. In a battle between troops, it was necessary to wear uniforms that would distinguish between friend or foe. Colorful red capes or feathered helmets were worn to overwhelm an enemy and show rank.

Uniforms were less fancy in the age of Napoleon. At the time, they put tin buttons on military uniforms, but tin becomes unstable at a temperature of minus 13.2 degrees Celsius (8.24 degrees Fahrenheit) and breaks into pieces when the temperature drops to minus 30 degrees Celsius. That may help explain why Napoleon failed to conquer Russia: French soldiers could not tighten up their uniforms because they had broken buttons, which caused them to suffer from frostbite.

Military uniforms have also dictated fashion trends. Nazi guard uniforms were altered by designer Hugo Boss, and the coats that protected British soldiers from rain in the trenches became known as “trench coats.” Burberry, which designed the coat, is now common in Korea.

The military uniforms of the Korean Army have evolved from khaki to camouflage. Now, however, the Army plans to issue a new, more fashionable and individually tailored uniform to each soldier. In the age of Napoleon, young people joined the army because they loved the colorful uniforms. I wonder if Korea’s new uniforms will help build up our Army and diminish draft dodging.