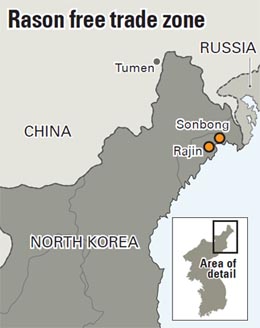 The goal of the investment, stated in the documents, is to build Rason, a northeastern North Korean city on the East Sea that borders both China and Russia, into the “biggest industrial zone in Northeast Asia” in around 10 years.

According to the documents, the deal is “a strategic joint project based on trust between high-level figures” in China and North Korea, which suggests it may have been negotiated by North Korean leader Kim Jong-il during two visits to China last year, on which he met Chinese President Hu Jintao.

The North’s economy has suffered under international sanctions on trade and financial services overseas, imposed after its nuclear weapon tests, and is desperately seeking foreign investment.

China is investing in Rason as an export base to serve markets in Japan, southern China and Southeast Asia.

Rason is a merger of two towns, Rajin and Sonbong, and was designated the first free trade zone in the North in 1991. It was promoted to a “special city,” which means it has fewer restrictions on businesses.

“We have a deep interest in North Korea’s ample natural resources,” an official of Shangdi Guanqun Investment Co., Ltd. told the JoongAng Ilbo. “To facilitate the export of natural resources [from the region], we will invest $300 million first and construct a coal-fire power plant at the coal mine and build a railway, roads, and harbors and piers [near it].”

The Chinese firm’s official said the company opened an office in Pyongyang at the end of last month.

Shangdi Guanqun Investment, established in 1995 by the Chinese government, is a trading firm specializing in oil processing, natural resources and international financial services. It is one of the key companies in China’s 12th five-year economic development plan that starts this year.

North Korea’s Investment and Development Group is in charge of developing the country’s four free trade zones. The other economic special zones are in Kaesong, Mount Kumgang and Sinuiju.

The Shangdi Guanqun Investment official said the company will build an oil refinery in Rason, where it plans to refine crude imported from the Middle East and Russia and sell the output to China or other countries.