Foods and friends we may have forgotten

Foods and friends we may have forgotten 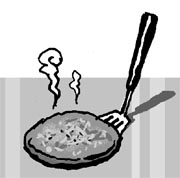 A mung bean pancake, or bindaetteok, is the most popular food choice for Koreans short on cash. A popular song during the Japanese colonial period titled “Bindaetteok Gentleman” goes: “If you don’t have money, just go home and fix yourself a mung bean pancake instead of visiting fancy restaurants and bars.”

Poet Seo Cheon-wu’s poem “Bindaetteok” has a similar sentiment: “If you have money and look good, have fun at a night club/ If you don’t have money and aren’t confident about your looks, don’t ruin the mood at trendy clubs/ Just go home and fix yourself a mung bean pancake.”

Bindaetteok originated from rice cakes, as recorded in Joseon Dynasty documents. The pancake appears in the “Joseon Cuisine Cookbook” from 1924. But bindaetteok is written in Chinese characters as “binjatteok,” or “the rice cake of the poor.” That’s why some claim that bindaetteok is traditionally considered a humble, inexpensive food.

Whenever a famine hit during the Joseon Dynasty, the mung bean rice cake was a means of charity. Refugees from the eight provinces around the country would move to the capital and homeless refugees living outside of the East and South gates were given a binjatteok ration. Rich families would deliver mung bean rice cakes in a cart and distribute the food to help the poor. Even today, the mung bean pancake is still a favorite of the common folk. President Roh Tae-woo, who promoted himself as an ordinary man, offered mung bean pancakes at a reception celebrating his election victory.

Recently, mung bean pancakes received a rave review from a foreign journalist. Tyler Brule, publisher and editor-in-chief of the global culture and style magazine Monocle, wrote in his latest column for the Financial Times that bindaetteok is one of the 10 cultural products Korea should consider exporting. He claimed that the savory pancakes “have all the elements needed to become a global fast-food favorite.” Brule is a global trendsetter, so his praise is reliable.

However, we may need to give bindaetteok a fresh glance because it has become so common. After all, the mung bean pancake is not the only thing we may have overlooked just because we are used to it. Maybe we should all take a moment to think about the truly valuable people in our lives that we have neglected just because they are so close.