Not your average twin talents

Not your average twin talents 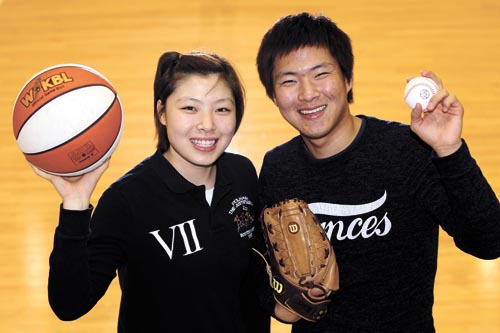 
Lee Ji-hyeon and Lee Hyeon-ho have a lot more in common than your average brother and sister. The fraternal twins are embarking on careers in professional sports this year in the WKBL and KBO, respectively.

Once they’re both in the big leagues, they will join only two other sets of twins in Korean professional sports.

They were both drafted 11th overall last year. Ji-hyeon was selected by the Shinsaegae Coolcat of the WKBL and is currently competing in her rookie season, while Hyeon-ho was drafted by the KBO’s Doosan Bears and is participating in a winter camp ahead of his rookie season this spring.

“It was a surreal experience,” Ji-hyeon said about the draft. “I thought to myself that maybe this is why we’re twins.”

Hyeon-ho, on the other hand, saw the situation a little differently.

“I was a bit disappointed. To be honest, I thought that I would get drafted a bit higher,” Hyeon-ho said.

A talented pitcher in high school, Hyeon-ho led Jemulpo High School, in Incheon, to the finals of the 2010 National High School Baseball Championship game before losing to Kyungnam High School.

Hyeon-ho even pitched two back-to-back complete games as the ace of the Jemulpo staff.

“I saw a close-up of Hyeon-ho’s face in the televised finals and he was bawling his eyes out at the end of the game. I got emotional and shed some tears myself,” said his sister.

Despite coming up short of the title, it was an impressive accomplishment considering it was Jemulpo’s first appearance in the championship series since the 1984 season.

“I wanted to win the tournament for our school but came up short. I was overcome with emotion at the time,” said Hyeon-ho.

“My sister has never been in a relationship and is naive,” said Hyeon-ho. “Except for my father, all the guys are the same [in my family],” he said referring to his brother.

Their protective nature is only natural when considering the twins share many similarities.

“We have moles on the exact same spots on our hands, feet and neck,” said Ji-hyeon. “When one of us gets sick, strangely enough, the other also gets sick.”

Ji-hyeon is a guard on the Shinsegae squad, which sits third overall in the six-team league.

While her brother is considered a top-flight pitching prospect, Ji-hyeon is known for her strong work ethic.

“My sister is always up by 6:30 a.m. and is usually the first one at the gym, working tirelessly on her shot,” said Hyeon-ho. “I’m still fast asleep.”

Having been raised in a blue-collar household, both siblings were instilled with a strong work ethic at an early age, they said.

“Our parents worked hard to raise us. I want to succeed as a professional athlete to provide for them,” said Hyeon-ho.