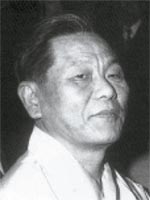 The Supreme Court yesterday vindicated independence activist and politician Cho Bong-am by overruling a death sentence handed down 52 years ago for breaking the National Security Law. Cho was hung for the crime on July 31, 1959.

In its ruling, the Court said Cho played a crucial role in shaping Korea’s progressive politics.

“The Jinbo [Progress] Party [founded by Cho] cannot be viewed as a denial of free democracy or a violation of the basic order of democracy,” the Supreme Court ruled yesterday afternoon. “It also cannot be seen as a political party established to overthrow the nation.”

The Truth and Reconciliation Commission reviewed Cho’s case at the request of his 83-year-old daughter Cho Ho-jeong, and called for a retrial in 2007 to clear his name.

Cho, born to a peasant family in Ganghwa Island of Incheon in 1898, had a tumultuous life, living through Japanese colonization, the Korean War and finally challenging Korea’s first president, the autocratic Syngman Rhee.

Cho served his first prison term on charges of participating in the March 1, 1919, Independence Movement, and he was active in the independence movement against Japanese rule.

After entering politics as a lawmaker in 1948, he served as Korea’s first agriculture minister and was appointed vice speaker of the National Assembly in 1950.

Cho ran for the presidency against Rhee in 1952 and 1956. In the second election he received 30 percent of the vote, which worried Rhee.

In November 1956, he formed the Jinbo (Progress) Party, which led to his arrest in January 1958 on allegations of being a communist sympathizer, violating the National Security Law.

Cho was investigated by Korean special military forces for two months. The military additionally charged him with espionage based on testimony from a military official surnamed Yang who worked in the government’s military espionage bureau, claiming he had information that Cho started the Jinbo Party on orders from and with funding from North Korea.

He appealed for a retrial, but his request was rejected and Cho was hung 18 hours later.

Before being executed, Cho said, “The only sin I have committed is that I have initiated a political movement that campaigned for a society in which a lot of people equally live well. I hope my death doesn’t come in vain and will serve as development of this country’s democracy.”

“Military special forces don’t have the right to investigate an individual, but Cho was taken to the force for questioning without a warrant,” the Court said. “It’s also hard to credit the testimony [of Yang] because it can’t be seen as a verified testimony.”

In regard to charges that he possessed ammunition and a gun, the Supreme Court suspended the charges saying Cho was “an independence activist and Korea’s first agriculture minister, who built a foundation for Korea’s economy.”

Cho’s daughter hailed the Court’s ruling, though she said it took her family over five decades to restore her father’s reputation.

“I lived a hard life over 50 years [after my father’s death], and I’m relieved I can see my father after I die,” Cho Ho-jeong said in a press briefing. “I should engrave an inscription on my father’s tomb. I haven’t engraved an inscription yet because I wanted to do it after he was vindicated. Killing a political opponent in this way should be noted so it won’t be repeated.”

An official at the Supreme Court said the ruling was significant in that it will spark a revaluation of liberal politicians and activists of the Jinbo Party, who were tortured and branded as pro-North Korean activists.

“Cho’s case is regarded as Korea’s first judicial murder, but to a large extent, he was a victim of the Cold War,” the official said.