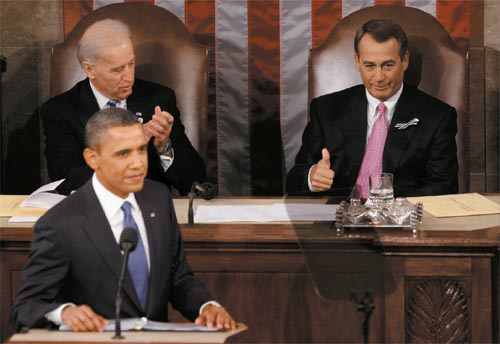 Recently elected Speaker of the House John Boehner (R-OH) gives a thumbs up as Vice President Joe Biden applauds during U.S. President Barack Obama’s State of the Union speech to a joint session of Congress on Capitol Hill in Washington, Tuesday.[REUTERS//YONHAP]


Seoul and Washington stepped up pressure on Pyongyang to live up to its denuclearization commitment yesterday, as U.S. President Barack Obama stressed its alliance with South Korea and urged the North to respect its past pledges in his State of the Union address to the U.S. Congress.

“On the Korean Peninsula, we stand with our ally South Korea, and insist that North Korea keeps its commitment to abandon nuclear weapons,” Obama said, touching upon the issue briefly in a speech mainly devoted to domestic issues.

Obama mentioned Korea two other times in the speech, praising its wired infrastructure and the country’s attitudes toward teachers in its educational system.

Obama’s speech coincided with Seoul’s preparation for an inter-Korean meeting next month to defuse tensions on the peninsula after the North’s two deadly attacks last year on the South.

In addition to the U.S. president’s remark, more pressure from Washington was exerted on Pyongyang yesterday. U.S. Deputy Secretary of State James Steinberg met with Minister of Foreign Affairs and Trade Kim Sung-hwan in Seoul and discussed the nuclear crisis and the outcome of last week’s summit between Obama and Chinese President Hu Jintao.

North Korea, which has conducted two nuclear tests, walked out of six-party nuclear talks in early 2009, but recently indicated its intention to return to the negotiations. In November, an American scientist visiting North Korea was shown a previously unknown uranium enrichment facility, which even Chinese President Hu called “a concern” after meeting with Obama in Washington.

“I am very pleased that China, for the first time, expressed its concerns toward North Korea’s uranium enrichment program in the joint statement of the summit,” Kim said. “President Obama also said he had agreed with Hu to deter North Korea’s additional aggressions, and it was also meaningful.”

Kim also said Obama’s call for the North to give up its nuclear arms program, in cooperation with Seoul, in the State of Union address were “extremely encouraging and a positive sign and a very appropriate message” toward Pyongyang.

Before a closed-door meeting with Kim, Steinberg talked of Seoul and Washington’s “shared determination to deal with the challenge of North Korea in a way that protects the interest of South Korea, the United States and all the countries of this region.”

He also said cooperation between Seoul and Washington “led to a successful outcome of this summit [with China], and I think it will put us in a good position moving forward.”

After his meeting with Kim, the U.S. diplomat spoke positively about Seoul’s plan to bring the North’s uranium enrichment program to the attention of the United Nations Security Council.

“It’s very important that the international community sends a strong message that the uranium enrichment program, indeed any uranium enrichment program by North Korea, would be inconsistent with its international obligations, with Security Council resolutions and with its own commitments,” Steinberg said. “I think the strong position that we’ve all taken and I think the clear message coming out of the summit between President Obama and President Hu should help drive that message home.”

He also said the stronger the message is, the more successful the process will be to persuade Pyongyang.

In addition to the nuclear issue, Obama called on Congress to ratify the pending free trade agreement with Seoul.

“Last month, we finalized a trade agreement with South Korea that will support at least 70,000 American jobs,” he said. “This agreement has unprecedented support from business and labor, Democrats and Republicans, and I ask this Congress to pass it as soon as possible.

Obama did not say when he will submit the ratification bill to Congress.

South Korean officials and experts welcomed Obama’s speech. “Mentioning the North Korean nuclear issue in his State of Union address has profound meaning, because the speech is a very important occasion,” said Yun Duk-min, a professor of the Institute of Foreign Affairs and National Security. “It shows that Obama treats the issue very importantly.”

In his speech, Obama also urged Americans to learn from Korea’s examples in education and Internet infrastructure development.

Promoting education reform, Obama stressed the importance of the role of teachers for students’ success. “In South Korea, teachers are known as ‘nation builders.’ Here in America, it’s time we treated the people who educate our children with the same level of respect,” he said.

He also praised Korea’s Internet infrastructure, urging the United States to keep up with other countries’ advancements.