Much at stake in 3rd-place match against Uzbekistan

Much at stake in 3rd-place match against Uzbekistan 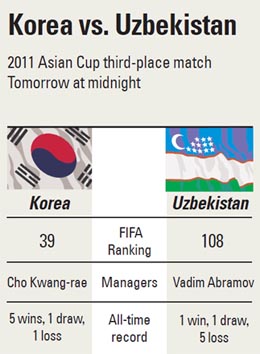 With national pride and an automatic berth in the 2015 Australia Asian Cup on the line, Korea will play Uzbekistan in the third-place match on Saturday at midnight, Korean time.

“We need to place third to earn an automatic berth in the 2015 Asian Cup,” national team manager Cho Kwang-rae said yesterday. “I know our players are fatigued but I plan on sticking with the starting lineup I used in the tournament.”

On paper, Korea has a significant advantage over its opponent. Korea is ranked 39th in the world and Uzbekistan is ranked 108th. Korea also holds an all-time record of five wins, one draw and one loss against the Central Asian country. The only time Korea lost to Uzbekistan was at the 1994 Hiroshima Asian Games semifinals - a 1-0 nail-biter.

But with Korea coming off two consecutive games that extended to extra time, it remains to be seen if the players will have physically recovered for the match.

Koo Ja-cheol is expected to be a healthy scratch in tomorrow’s match due to fatigue.

Koo emerged as a central figure in Korea’s offense at the 2011 Asian Cup by scoring four goals and adding two assists in five games. 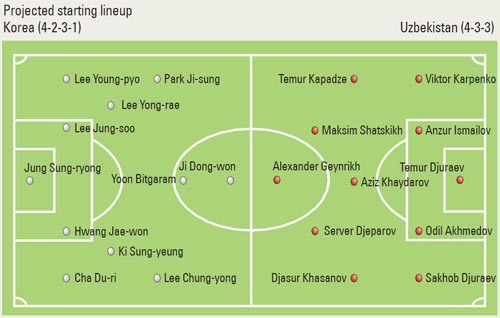 However, having also captained the U-23 national team at the 2010 Guangzhou Asian Games last November, Koo is likely tired and not in top shape.

Koo is expected to be replaced by Yoon Bitgaram, but another lineup shift can have captain Park Ji-sung shift to Koo’s secondary forward position with Yeom Ki-hun or Son Heung-min filling in at left wing.

However, Park Ji-sung’s status for the game was questionable as of yesterday.

“Ji-sung told me after breakfast this morning that his right knee did not feel right,” said Cho at a press conference yesterday.

“It’s difficult to go into details at the moment but there’s slight swelling in the outer part of his right knee and we think it has filled with fluid. We will have him get as much rest as possible before deciding on his status for the match against Uzbekistan,” Cho said.

Lee Young-pyo will play in the game. Both have hinted at retirement from international competition and have said they will make a formal announcement about their futures at the end of the game tomorrow.

Park earned his 100th cap of his international career on Tuesday night, while the game was Lee’s 125th of his career.

Park’s father told the Korean media leading up to the Asian Cup that the tourney would be his last as a Taegeuk Warrior.

Park’s right knee, which has been repaired twice in the past, is known to swell and fill with fluid after lengthy flights to participate in international games.

The Uzbeks, led by Server Djeparov, Alexander Geynrikh and Maksim Shatskikh, have managed to score eight goals at the 2011 Asian Cup. On loan from Bunyodkor, Djeparov won a K-League Championship title with FC Seoul last year and is the recipient of the 2008 Asian Football Confederation Player of the Year honor.

The Korean defense, which looked shaky at times in the semifinal match against Japan, will have starting center defender Lee Jung-soo return to the lineup.

Team manager Cho, who uses a 4-2-3-1 base formation, had some success neutralizing the speedy Japanese offense by switching to a 4-1-4-1 formation in the second half of the semifinal match Tuesday night.