From playwright to director: Bold move

From playwright to director: Bold move

Playwright Jang Yu-jeong, who has made the rare jump from small-theater productions to box office winner, attributes some of her recent success to how she gets her stories - through life experiences. By Cho Mun-gyu


A highly regarded Korean playwright, Jang Yu-jeong had a megahit with the musical “Oh! While You Were Sleeping” in 2005. But since then, she has embarked on a very different endeavor.

Jang decided to turn her attention to directing, with the film “Finding Mr. Destiny,” which first premiered as a musical in June 2006. The original musical production, which Jang wrote, had more than 1,600 shows each year and drew 360,000 viewers.

The story is about a man named Han Gi-joon, who leaves his mediocre job at a travel agency and starts a new business venture - an agency to help people find their first love. He meets Seo Ji-woo - a girl who wants to find her own first love after breaking up with her boyfriend - even though Seo can barely remember him except for his name, Kim Jong-wook. She had been dragged to the agency reluctantly by her worried father.

This sweet and attractive story is what made the musical popular and turned out to be Jang’s chance at the silver screen. It isn’t common in Korea for an original musical or play that was shown in a small theater to be made into a movie - much less for a playwright to hold the megaphone herself.

But Jang’s efforts are paying off. About 1.1 million viewers have already seen the film since its release on Dec. 8.

“Directing the movie was like a journey into the abyss,” Jang said. “When I finish something I always feel like there is something else to surprise me. Musicals are a lot more stable compared to films in that aspect.” 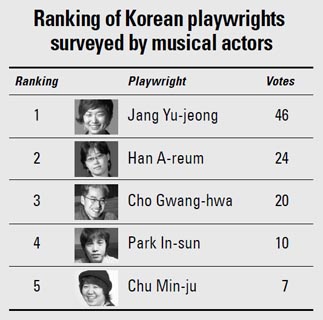 Even if she feels the journey is tough, she said she still wants to do both.

Jang has released a new production each year since her debut in 2005 and numerous reviews have complimented her, saying she has consistent talent and shows a high degree of competitiveness.

“In my field of work, we say that the assistant director’s opinion is scarier than the viewer, meaning that those who are working alongside you have better insight,” said Jang. “The fact that actors have considered me the best is better than any award I can receive.”

Jang graduated with a degree in Korean literature from Chosun University and continued her studies in play direction at the Korean National University of Arts. Jang said that when she was an elementary student, she would often grab a book to read at her friend’s house or create skits to show off at field trips.

Maybe it was this early obsession and talent that allowed her to craft successful written works - there have been many requests for replays of her works, like “Oh! While You Were Sleeping,” “Finding Mr. Destiny,” and “Hey, Bro?,” which enjoyed sold-out sessions at almost every production.

But it’s where she gets her inspiration that may be the key to her success.

“I thought of ‘Oh! While You Were Sleeping’ while I was volunteering for some unfortunate families,” Jang said. “‘Finding Mr. Destiny’ was written after having my heart broken by my first love and ‘Hey, Bro?’ came to me when I married the eldest son of a very conservative family.”

Even though her works come from personal experiences, she said that any story should be written so the sources can’t recognize themselves when they watch it.

“You should not be too involved in your writing,” Jang said. “You must learn to take yourself out of the picture so that the audience can relate to the characters.”

Surprisingly, “Finding Mr. Destiny,” was written in only four days.

“I guess if I was a chef, I would actually start cooking only when all the necessary ingredients are fully prepared,” said Jang. “I only start writing when I complete all my research and character selections.”

But Jang, despite her diverse talent, said she isn’t quite sure what she wants to do next.

“I have different thinking caps for writing and directing,” Jang said. “Being a director means to remove the character from the paper and paste them on stage. I hear that my writing feels alive and the reason to that is probably because I also direct. Of course I can’t forget the actors and actresses who make my work shine.”