NO END IN SIGHT
Two Koreas back at square one 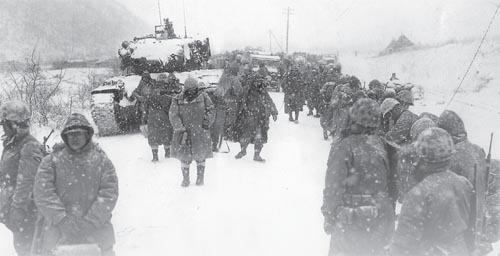 U.S. marines take a break from their march near Lake Jangjin in South Hamgyong Province on Dec. 8, 1950. Provided by the National Archives and Records Administration


More than 60 years after North Korea invaded South Korea, the final chapter of the war is yet to be written. After the brutal three year war, the two sides fought their way back to square one.

The legacy of war is ever-present: a nuclear armed North is one of the poorest, most repressive places on earth, while the South is a thriving, wealthy democracy.

This series attempted to shed light on the war from Gen. Paik Sun-yup’s perspective. The following final chapter is a summary of the Korean War’s major events covered in the series.


The outbreak of the war

Gen. Paik Sun-yup recounts the outbreak of the Korean War. As the commander of the ROK 1st Division, General Paik rushed to the front lines of the Imjin River after news broke of North Korea’s invasion on June 25, 1950.

The ROK Army was no match for North Korean troops, who pushed their way down south using Soviet tanks. The unprepared and ill-equipped ROK Army engaged North Korea in four days of fierce battle, but ended up retreating south of the Han River in Seoul. 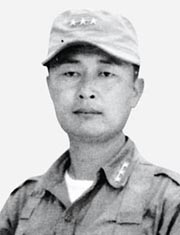 With the North Koreans continuing to press hard, the ROK Army was pushed down as far as Dabudong, North Gyeongsang, 20 kilometers (12.4 miles) north of Daegu. General Paik’s 1st Division had the difficult job of defending the Dabudong Line against three North Korean divisions commanded by Gen. Choi Jung.

The Battle of Dabudong was crucial in that it was considered the last line of defense as the North drove south. If the ROK Army had lost there, North Korea would have seized Daegu and Busan. 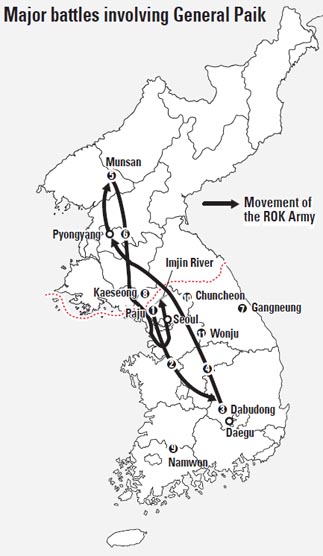 Perhaps the biggest turning point in the war was the U.S. amphibious assault at Incheon - called the Incheon Landing - on Sept. 15, 1950. The mission required allied troops on the Dabudong Line to sweep up and support the invading U.S. troops in Incheon, but they were delayed.

The tide of the war shifted as the Chinese People’s Liberation Army entered the war in October 1950. The PLA came down in droves. South Korean and U.S. troops were badly outnumbered and had difficulty adapting to their tactics.

The PLA was able to push allied troops south of Seoul to Pyeongtaek, Gyeonggi, before they put together a strong counteroffensive and pushed the front lines back to the 38th parallel.

General Paik was promoted to commander of the ROK 1st Corps in Gangneung, Gangwon, in April of 1951. The PLA succeeded in breaking through the eastern front lines. They earned key victories in the Battle of Hyun-ri and seized the strategically important Omachi Hill in Inje, Gangwon.

Running low on supplies and ammunition, the PLA concentrated its effort on penetrating the ROK-U.S. defensive line manned by ROK troops - what they deemed to be the weakest link on the eastern front.

Truce negotiations started in July 1951 at the urging of enemy forces. General Paik was selected as the lone Korean representative at the armistice talks in Kaesong, North Hwanghae Province.

The two sides did not make much progress, however, as the Chinese and North Korean generals resorted to using psychological tactics to stall the negotiations.

The two sides would make little or no progress before the ROK-U.S. commanders decided to apply pressure on enemy troops on the front lines in order to force them to take the negotiations more seriously.

General Paik was reassigned to the post of ROK 1st Division commander and given command of a mission to fight the North Koreans on Mount Jiri.

Remainder of the war and post-war 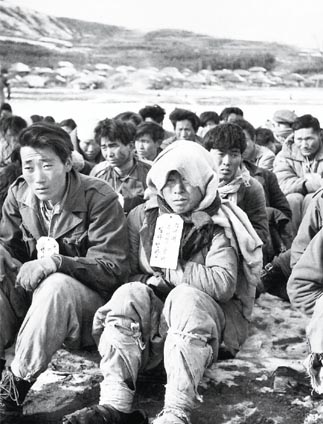 Partisan captives await their transfer near Mount Jiri in March of 1952. [JoongAng Ilbo]

Upon successfully carrying out guerrilla missions to weed out North Korean partisans on Mount Jiri and within the ROK military, General Paik led the effort to re-establish the ROK 2nd Corps.

General Paik would go on to become the first Asian commander of the First Field Army in 1954, commanding 400,000 troops along the 155-mile-long border.

He would also serve as the Chairman for the ROK Joint Chiefs of Staff until his retirement from military service in May 1960.

After retiring from the ROK Army, General Paik would go on to serve as ambassador to Taiwan, France and Canada from 1960 to 1965. He also served as minister of transportation between 1969 and 1971, helping construct the Seoul Metropolitan Subway System. General Paik also helped build the War Memorial of Korea in Yongsan, central Seoul.

March 1952
Paik selected as commander of the ROK 2nd Corps