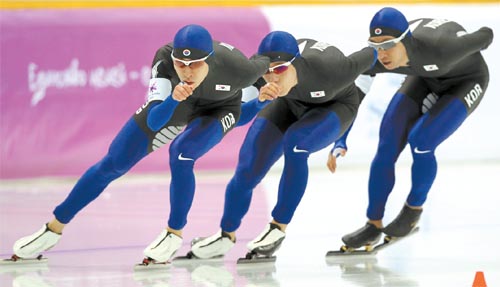 
Speed skater Lee Seung-hoon came up short yesterday in his attempt to win a fourth gold medal at the 2011 Winter Asian Games. But he will still go down in history as the first Korean long-track speed skater to haul in three golds in a single Asiad competition.

Lee almost increased his gold medal count to four in the men’s team pursuit at the Indoor Speed Skating Stadium in Astana, Kazakhstan, where he hooked up with short-distance specialists Lee Kyou-hyuk and Mo Tae-bum. However, the Japanese squad consisting of Hiroki Hirako, Shota Nakamura and Teppei Mori managed to edge out the Korean team, crossing the finish line at 3 minutes, 49.18 seconds versus the Koreans’ 3 minutes, 49.21 seconds.

Lee finished the Winter Asian Games with gold medals in the 5,000-meter, 10,000-meter and Mass Start events and added a silver medal in the team pursuit competition to join an exclusive club of Korean skaters. 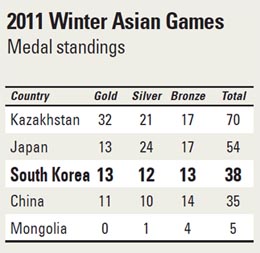 Only two other skaters, both short-track speed skaters, have won three gold medals at a Winter Asian Games: Kim Ki-hoon (1990) and Chae Ji-hoon (1996).

Female speed skater Seiko Hashimoto of Japan was the last athlete to win four gold medals, a feat she accomplished at the 1990 Winter Asian Games in Sapporo, Japan.

Over the weekend, Lee placed first in the 10,000-meter speed skating event with a time of 13 minutes, 09.73 seconds. That came after Lee won the 10,000-meter race at the 2010 Vancouver Winter Games to set an Olympic record of 12 minutes, 58.55 seconds when strong favorite Sven Kramer of the Netherlands was disqualified for failing to change lanes in the 17th lap of the race.

The gold was the first for an Asian skater in a long-distance speed skating event. Lee also won a silver in the 5,000-meter event in Vancouver.

The 23-year-old skater’s feats are all the more impressive when considering his background.

Lee skated in short-track events throughout his career but actually failed to make the national team tryouts in April 2009, leaving him searching for a way to participate in the 2010 Vancouver Winter Games.

His solution: switch to long track.

The move paid off, as he qualified for the Games and went on to win two medals.

Having completed a historical outing at the 2011 Winter Asian Games, Lee is already looking forward to another showdown with Kramer.

The Dutch skater has made it official that he will not compete in the Essent ISU World Cup Speed Skating Final in Heerenveen, the Netherlands (to take place from March 4-6), but Lee is eager for a shot at the Dutch world champ next year.

“I have to give it everything I have in training in order to catch up to Sven Kramer,” Lee said in an interview with the JoongAng Ilbo. “I still have until next year to prepare for Kramer and I want to beat him fair and square next time.”

Korea improved its total medal haul over the weekend to 13 gold, 12 silver and 12 bronze, its best showing and good enough for third overall in the medal count.

Korea was coming off two consecutive losses to finalists Japan and Kazakhstan in its previous matches.