30 years of bad blood boils again to the surface

30 years of bad blood boils again to the surface 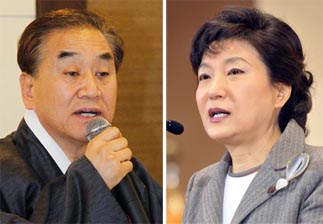 The 30-year-long confrontation between two political heavyweights of the Grand National Party - Park Geun-hye and Lee Jae-oh - was renewed after Lee apparently unleashed on Park.

Lee, who is President Lee Myung-bak’s minister without portfolio who deals with political affairs and is a key advocate of amending the Constitution, made controversial remarks on Friday during an interview with MBC radio.

“It makes people very exhausted when someone declares his or her presidential ambition two years before the election or works as if he or she is the president,” Lee said. “The people tend to hurry too early, but it is the best strategy to go all in for the success of the Lee administration, at least this year, no matter who it will be.”

Park, the former GNP chair and eldest daughter of late President Park Chung Hee, has long been a front-runner for the 2012 presidential race. She recently opened a think tank, which was largely seen as an early start to her campaign. Her presentation of a series of welfare initiatives was also seen as a move to win over voters.

In a Twitter posting Thursday, Lee said he will fight against anyone who opposes amending the Constitution. “I am David and my opponent is Goliath,” he wrote.

Asked during Friday’s radio interview if Park was the Goliath he referred to, Lee said, “There was no mention in the Bible that Goliath was a woman.” He said he was simply comparing the confrontation over the Constitution with the biblical battle.

Park has not reacted directly to Lee’s remarks, but tensions appeared to increase inside the GNP.

The bad blood between Lee and Park began in 1979 when Lee was imprisoned on charges of criticizing the presidential daughter.

Lee, a human rights activist at the time, had complained that a monument erected to honor a visit by Park to the Andong Dam in North Gyeongsang was larger than the memorial for the workers who died during the construction. After Lee said the two monuments showed the sad reality of the regime, he was imprisoned for violating the emergency decree that banned criticism of the government.

The two politicians faced each other again in the Grand National Party in the late 1990s. Tensions exploded in 2004 when Lee attacked Park as “the daughter of a dictator.” Park responded angrily by asking, “Have you joined the party without knowing that the military governments were its roots?”

The two briefly made peace in early 2006 when Park was the GNP chairwoman and Lee was the floor leader. But the two crossed the Rubicon in 2007 during the GNP’s presidential primary, as Lee played a major role in President Lee’s campaign.

After Park’s bitter defeat, Lee Jae-oh warned Park loyalists that he wouldn’t allow them to undermine the presidential campaign. In the 2008 general election, conservative voters supporting Park turned away from him, costing him his legislative seat. After a self-imposed exile in the U.S., Lee made a political comeback, winning a legislative by-election in July 2010. Only a month later, President Lee named him minister without portfolio to handle political affairs and special tasks.