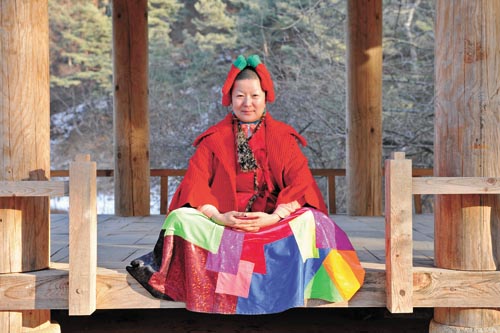 Ahn Eun-me is as well known in the Korean dance community for her edgy and unconventional choreography as for her bald pate and off-beat fashion sense. Here, she is pictured at a pavilion in Yeongju, North Gyeongsang, in October. Provided by Doosan Art Center


Walking into Doosan Art Center last Tuesday, it was easy to spot dancer and choreographer Ahn Eun-me at a press call for her upcoming performance “Dancing for Grandmother.” She was standing near the entrance with her signature shaved head, which on this day was losing ground to the oversized red, green, orange and pink earrings dangling from her ears and the six-inch heels peeking out from her equally colorful striped dress.

“I collect earrings and shoes from all over the world,” Ahn said, explaining that her accessories are organized in boxes covering an entire wall.

When it comes to dance, her passion to follow her own instincts is just as strong as her unique sense of fashion. And just like her style, which often goes beyond that of the average person’s idea of fashion, her edgy dance works, which often come with outlandishly decorated sets, scantily clad dancers and provocative choreography, have often made her the rebel of the Korean dance scene.

But this year, she is putting something different on stage with her “Dancing Grandma” project, which showcases the physical movements of elderly women. The project was initiated to document the history of the way women move for the next generation.

She and her dancers traveled to small towns across the country last October to record images of elderly women dancing. The performance includes these images and live performances by the women and her dance company.

The Korea JoongAng Daily sat down with Ahn after the press call to hear more about the project. 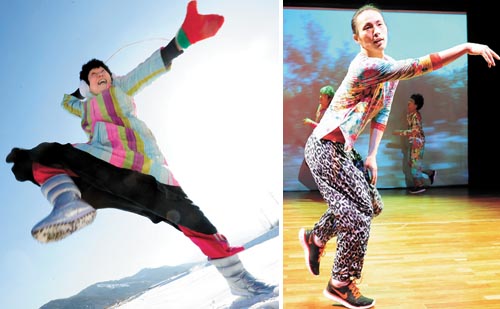 Q. How did you get these women to dance for you? Did it go smoothly?

A. Yes and no, since there were some people who did not care for dancing. A lot of them said “no” at first, but when they saw us performing in front of them I could see in their eyes that they wanted to get out and move their bodies, too. Soon, without any further talk, they started dancing. And thanks to the widespread use of digital camcorders, they weren’t too afraid of being recorded.

It would have been much easier for us to get them to dance if we had all been a little tipsy, but I didn’t want to do that because I thought their facial expressions would have all come out the same if they were dancing while intoxicated.

We wanted to capture them as they were. Some were shy, some were trying their best to look pretty, some were powerful. They all showed their individual characteristics through their facial expressions as they danced.

You said you played music for the women to dance to. But when you played the video of them dancing during the performance (during the press call), you had the background music removed.

I wanted the audience to focus on the women’s movements rather than on the music, regardless of whether they were dancing to folk or pop.

What about the pants the dancers wear on stage? They look like mombbae (elastic-waist pants that taper at the ankle), which are what elderly women wear at home.

Those pants are the greatest of all time. Believe it or not, I heard that mombbae are now a popular Halloween costume in other countries. And the bright colors and flowery patterns are more than enough to make them suitable for parties.

Do audiences get to see the dancing grandmas on stage?

Yes. The show opens with our dancers performing movements inspired by those of the grandmas. Then we show a video of the grandmas we recorded while we were on the road. After that, the 25 ladies we met join us onstage and we dance together. Finally, the audience is invited to join us at the end of the performance.

The title of the project is “Dancing Grandma.” Why did you name the performance “Dancing for Grandmother”?

I wanted to let the audience know that there is more to the performance than just having many grandmothers onstage at once. 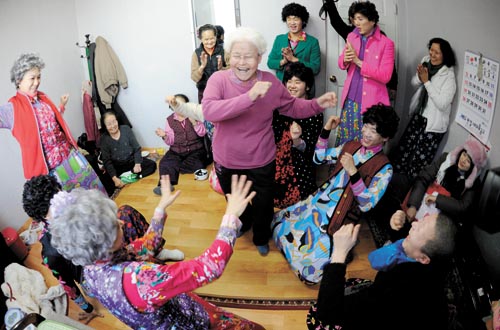 Choreographer Ahn Eun-me, above left, went on the road to document the movements of grandmothers in the Korean countryside. She and members of her dance company sought and then danced with the women, including those pictured in Yeongju, North Gyeongsang, in October. Ahn will perform with her company, which includes dancer Jung Wan-young, center, Friday to Sunday at Doosan Art Center in central Seoul. Provided by Doosan Art Center


I heard you recorded about 220 ladies dancing. How did you choose which material to show?

We tried to choose the more elderly women. The ladies we met ranged in age from 57 to 96. And we wanted to have some kind of cultural trigger in the background, such as a rice paddy, outdated hair salon or colorful store sign. After a hundred something years, these images will become valuable as a kind of living museum.

I’m hoping to make this into a documentary, but for now I’m only focusing on the upcoming performance.

Why did you think that it was important to have a performance involving the elderly?

Life is not short anymore. Now, human beings have to prepare for at least two acts in their lives. Since many people live into their 90s, life doesn’t end with just one act.

I wanted the women to be able to participate in projects happening in this world since they are also part of society. And I thought that the information contained in their bodies over the generations needed to be studied and passed on to subsequent generations. That’s the main reason I put this performance together. The project doesn’t focus on the performance onstage but more on the process of documenting that history.

What did you glean from the ladies’ movements?

They barely move their lower body but use more of their upper body, especially their arms. I think that’s because they spent most of their younger years working in fields or factories, so they always wished for the freedom to move their arms in any way they wanted. As they stretch out their arms, I think they show the hidden source of the power that they drew on to endure the hardships in their past.

I chose them, but they also chose me. One thing I care about the most when choosing who to work with is how crazy they are and how focused they can be on what they want to do. I need to know if they can give up everything to achieve the one thing they want. It has to be that simple.

Have foreign producers showed interest in this project?

Yes. A few friends have come to rehearsals and said they loved it. We also said that if we were to present this overseas, we would use local ladies so that the piece would have an entirely different charm. I think foreigners are more open to this type of collaborative and open performance.

Are you saying that even though the performance was created in Korea, foreigners would have an easier time understanding it?

Whatever you work on, you need to know how to step back and be objective. Then, when everything is ready to go and you have decided your direction, you can have everything come together for the highest level of satisfaction.

What will your next project be?

If I can continue doing archival projects, I eventually want to do something about middle-aged men who served in the military after Korea was freed from Japanese rule.

And if I have another chance after that, I want to do another project about the body language of teenagers. Each generation has a different memory card stuck in their brains, so their body language cannot be the same. Reading that language is where the fun is.