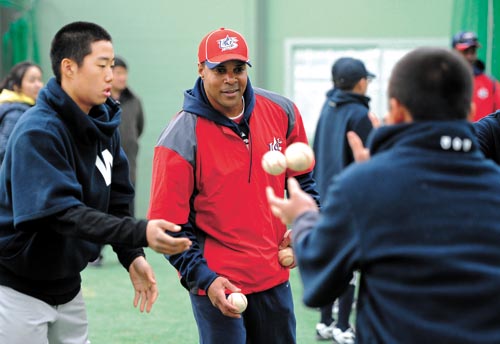 
The story of former Major League Baseball shortstop Barry Larkin is one of overcoming adversity and meeting new challenges.

He was born with his feet turned backwards and wore a metal bar between his legs as a child to correct the birth defect. That didn’t faze him - he became a star youth athlete, was one of the best products to come out of the University of Michigan and played 19 years with the Cincinnati Reds.

Wanting to communicate better with the growing influx of Hispanic players on his team and in the MLB, Larkin taught himself Spanish.

And when his team’s owner made racially and ethnically inflamed comments in the 1990s, Larkin, an African-American, spoke out against her.

So it probably makes sense that the 12-time All-Star, three-time Gold Glove winner, nine-time Silver Slugger Award winner, 1995 National League MVP and member of the 1990 World Series champion Reds would be a U.S. State Department sports envoy. He’s in Korea this week to talk about overcoming adversity and the importance of diversity, sports and education, through lectures, baseball clinics and interviews.

Widely considered as one of the best shortstops of all time and just a few percentage points shy of getting elected to the Hall of Fame this year - his second year of eligibility - Larkin is here with good friend and former Montreal Expos pitcher Joe Logan, meeting mixed-race children and conducting baseball clinics with students, soldiers and North Korean defectors, hoping to show that sports can break down barriers and develop skills for the future.

On Wednesday, Larkin and Logan put on a clinic for Korean Augmentation Troops to the United States (Katusa) and a small group of women professional baseball players. They are in Jeju Island today to coach little leaguers and children from multiethnic families.

Larkin first heard of the State Department’s sports envoy program through a mutual friend a few years back while he was teaching up-and-comers in Europe. He enjoyed his experience in Europe so much that he wanted to try his hand at teaching baseball to other kids around the world.

“They asked if I would be interested in doing this. And I knew we’d be working with a lot of youth, and Joe [Logan] runs a youth organization in Orlando, [Florida]. It was just a great opportunity,” said Larkin, who has traveled with Logan under the program to Colombia and Taiwan in the last two years.

Brian Gibel, the cultural affairs officer at the U.S. Embassy in Seoul, said Sports United - an arm of the State Department that runs the sports envoy program with the goal of aiding youth in finding success in athletics and life skills - had a list of players from multiple sports he could choose from. But he ultimately went with Larkin because winter is baseball’s traditional offseason and the sport is becoming increasingly popular in Korea.

“I know how great sports can be at breaking down barriers,” Gibel said. “We have a strong relationship with Korea. But [elsewhere] people with differences won’t sit down to talk with each other, but they will get together for a game of baseball or another sport.”

Gibel cited the historic example of Ping-Pong diplomacy - when the United States sent its best table tennis players to China in the 1970s for friendly matches - which opened the door for President Richard Nixon to visit the communist country and thaw an otherwise frozen relationship.

And while sports diplomacy in Korea may not have that kind of heft, Larkin and Logan hope not only to impart baseball knowledge on the youth of Korea, but to also draw from their own life experiences and teach them that no matter what challenges they might face, there’s always a way to win.

“I was born with both feet turned backwards; it was a birth defect,” Larkin said. “And doctors told my parents they didn’t know if I’d be able to walk correctly or be able to run. Any pictures of me as a child, my feet were turned forward, but I had a bar between my feet to keep them from turning backwards. My parents were crushed about it, but it didn’t stop me from doing anything. Physically, it was an obstacle I had to get over. And I did.”

Larkin, who retired from professional baseball in 2004 with a .295 career batting average, 198 home runs, 960 RBI and 379 stolen bases, said the highlight of his visit to Korea was speaking at the Pearl S. Buck Foundation on Tuesday. The foundation is a child welfare organization dedicated to improving the lives of underprivileged mixed-race children.

“We talked about some of our experiences, obstacles we had,” Larkin said. “I’m multicultural myself, so I can identify with those kids. And they asked some real in-depth questions for being such youngsters. There was a connection there.”

Said Logan: “It’s not about all the things you obtain, all the toys you get and put into one box. It’s about sharing experiences and helping other people achieve their dreams. It just so happens that something I’m good at is baseball, so that’s my gift to be able to share that.”