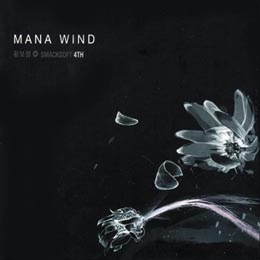 As their crazy name may suggest, Hwang Bo-ryung (Smacksoft) is a contemporary underground band.

Its fourth album, “Mana Wind,” continues the group’s experiments with the nature-inspired sound of their previous albums. At first listen, it also gives off a dark mood - almost like a less powerful version of Evanescence.

But through repeated listening, the strongest impression I had is that the group has developed its own sound.

The first few tracks on the album make Hwang Bo-ryung seem like it will be another one of those tree-hugging bands - with unidentifiable chords that sound like cries of nature. But as the album progresses, it becomes evident that the band has incorporated many different styles into its sound. It tries a little pop, classic rock and even folk music.

But even with all of the sounds the band has included here, the album is not messy, thanks to the melancholy voice of the main vocalist, Hwang Bo-ryung, the band’s namesake. Her voice goes well with the album’s subtle, nostalgic sounds.

This is demonstrated well in the song “Dream Up,” which starts off with soft, repeating guitar chords that create a curious mood - one that is further enhanced by the husky voice of Hwang.