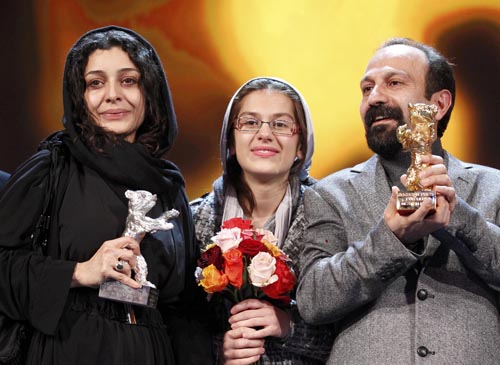 Director Asghar Farhadi, right, poses with the Golden Bear award together with actresses Sareh Bayat. left, and Sarina Farhadi, who both won the Silver Bear award for best actress, during the awards ceremony at the 61st Berlinale International Film Festival in Berlin on Saturday. [REUTERS]


BERLIN - The Berlin film festival wrapped up yesterday after handing a gripping Iranian drama, “Nader and Simin: A Separation,” its Golden Bear top prize in a year spotlighting the country’s embattled directors.

The picture by Asghar Farhadi, which also swept the acting prizes, tells the story of a crumbling marriage and examines the conflict between strict religious observance and the shifting values of the educated urban elite.

It had been the hot favorite among 16 international contenders to win the coveted Golden Bear at the first major European film festival of the year, which tends to reward timely, politically charged cinema.

Farhadi, who had already won a best director prize for his haunting film “About Elly” at the 2009 Berlinale International Film Festival, paid tribute to banned Iranian director Jafar Panahi in his acceptance speech.

He told reporters later that filmmaking is his means of political expression, rather than public declarations, and that the prize would ensure wide exposure for his picture.

“I prefer to make my films and try to express myself in my films. I am a filmmaker, I am not a hero,” he said.

“If I had said something on the stage, would that have changed anything? But my films can change something.”

The 11-day event focused on the plight of Iran’s filmmakers, offering a seat on the jury to Panahi, presenting a retrospective of his work and leaving one chair vacant for him at every competition screening.

An Iranian court in December handed the award-winning director a six-year jail sentence and a 20-year filmmaking ban, and though he is free on bail pending an appeal, he is barred from traveling abroad.

The international jury led by Italian-American actress Isabella Rossellini also gave the Silver Bear prizes for best actor and best actress to the entire ensemble of “Nader and Simin.”

The audiences of the Berlinale International Film Festival quickly embraced the picture in what many observers called an underwhelming year in the competition.

“Just when it seemed impossible for Iranian filmmakers to express themselves meaningfully outside the bounds of censorship, Asghar Farhadi’s ‘Nader and Simin: A Separation’ comes along to prove the contrary,” Hollywood Reporter critic Deborah Young wrote in a glowing review.

It tells the story of a woman, Simin, who separates from her husband Nader.

He winds up with both their 11-year-old daughter to care for as well as his Alzheimer’s-stricken father.

So to help him at home, Nader hires a young pregnant woman, who keeps her employment secret from her high-strung husband. The decision proves fateful when she has a miscarriage at work that her family blames on Nader.

Each character is thrust into a wrenching moral conflict over the child’s death, with a web of lies rapidly entangling each character.

German filmmaker Ulrich Koehler won the Silver Bear for best director for “Sleeping Sickness,” a movie about European aid workers in Africa caught between fascination and frustration with their environment and a longing for home.