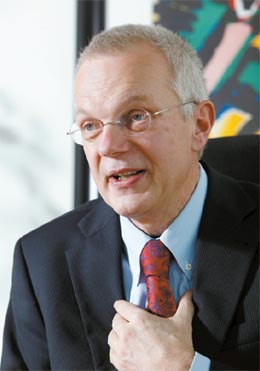 The Netherlands, a country of windmills, tulips, dikes - and home of beloved former Korean national football team manager Guus Hiddink - is both eager and able to become a more relevant partner with Korea as the two countries celebrate their 50th anniversary of diplomatic ties this year, said the Dutch ambassador to Korea.

Paul Menkveld, in an interview held at the Dutch embassy in Jeong-dong, central Seoul, said that the two countries are bound together as small countries with large international roles, an identity Korea is increasingly applying to itself with the rise of its giant neighbor, China.

The implementation of the Korea-EU Free Trade Agreement will also accelerate bilateral exchanges, the ambassador said.

“Fifty years is always a good time to reflect and to look for new ambitions,” Menkveld said. “And if you look back, we can see a lot of changes in our relationship, all for the better.”

Since establishing diplomatic ties in April 1961, the two countries’ bilateral trade grew to $9.5 billion last year, according to Korea International Trade Organization data. The Netherlands has invested $18.89 billion in 1,143 projects in Korea through 2009, only trailing the U.S. and Japan in foreign investment in Korea.

“This does not mean you should not be without ambition, and we are looking to further strengthen our bilateral cooperation,” Menkveld said. “I think in a globalized world, there are ample opportunities for countries to do so.”

Menkveld said the many similar characteristics the countries share provide a good basis for partnership.

One similarity is a geographical: the Netherlands is surrounded by bigger countries like Germany, France and the U.K. while Korea’s neighbors are China and Japan. A desire to catch up with bigger neighbors, along with both countries’ outward looking economic policies, has made them major exporters.

“We are both trading nations with a ratio of export to gross national product hovering around 50 percent,” the ambassador said, citing Amsterdam’s Schiphol Airport, the 3rd largest freight airport in Europe, and the port of Rotterdam, the largest port in Europe.

As far as trade is concerned, Korea has an impressive performance considering its size, but the Netherlands went further and, as the ambassador put it, “punches above its weight.”

But eight other countries have already reached the $1 trillion milestone, including the Netherlands, which did so in 2007. In terms of sheer economic size, Korea was the world’s 15th largest in 2009, one notch higher than the Netherlands.

The mutual benefit is expected to increase through the Korea-EU FTA, which was approved by the European Parliament last week. It still needs to be ratified by the Korean National Assembly.

Noting that the Netherlands is Korea’s third largest trading partner among the 27 European Union countries, Menkveld said he hopes the FTA will bring a substantial increase in bilateral trade and investment.

He said the FTA will benefit the Netherlands in particular in such areas as agriculture, electronics, chemicals and services.

During the interview, the ambassador also touched on the G-20 Seoul Summit in November, which the Netherlands was not invited to.

The ambassador said the Netherlands congratulates Korea’s hosting of the event.

“Korea put a lot of effort in preparing the G-20 Seoul summit and deserved to be congratulated on the results of the summit as well as its role as host country,” he said.

“Korea also had a keen eye to make sure nonparticipating countries were informed and strengthened the development cooperation part of the G-20 agenda.”

The ambassador said Korea is an excellent example for the Netherlands with respect to its strong focus on research and development, and close cooperation between government, companies and universities.

Korea’s success in overcoming economic challenges, including the Asian financial crisis and the recent global financial turmoil, is another lesson for the Netherlands, he said.

“If some other countries have problems in developing faster, I say ‘Go to the countries which can show you the way’ and one of them is Korea,” he said. “With adequate policies, determination of the people, hard work and a good education system, look what can happen. It sets a good example for the world community.”

The Netherlands, on its part, is cooperating with Korea in water management, pension systems and the agriculture sector, among other things, the ambassador said. Last month, the Dutch Embassy announced it would supply 1 million foot-and-mouth disease vaccines to Korea as it struggles with the epidemic.

English language skills provide another area in which the Netherlands can inspire Korea. The European country boasts a high level of multilingualism and few would deny that, apart from the U.K., it is one of Europe’s best English speaking countries.

If mastering the international language, which the ambassador said was a result of the international orientation of the country, has given the Netherlands such an edge, why couldn’t we expect the same thing for Korea, groping for survival between the two giant neighbors?

“I am pretty sure China and Japan are thinking the same,” the ambassador said.

He also agreed that the two countries might have more difficulty than Korea to implement a nationwide policy to improve English proficiency, given their sizes.

The ambassador said he noticed much progress in English proficiency in Korea over the years and expects progress to continue.

According to the Dutch Embassy, educational institutions in the Netherlands offer more than 1,500 English-language study programs and courses. Among 70,000 foreign students studying in the Netherlands in the 2009-2010 academic year, only 480 were Koreans. To further enhance academic cooperation, the ambassador said the two countries are working on several measures.

The Netherlands established the Nuffic Neso (Netherlands Education Support Office) in Seoul in October 2008. Last year, the Orange Tulip Scholarship was launched to enroll 30 Korean students annually in bachelor’s and master’s programs in the Netherlands.