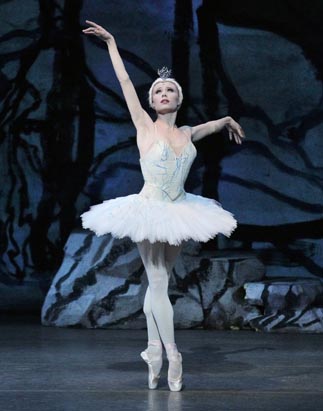 And you thought “Swan Lake” was only hot in Hollywood.

Call it fortuitous timing, but the folks at New York City Ballet have seen tickets for “Swan Lake” sell out faster than usual this season - they even added an extra show to accommodate demand. And move over, Natalie Portman: you may be favored for the Oscar in “Black Swan,” but there’s a real-life, flesh-and-blood ballerina generating heat as the swan queen.

Her name is Sara Mearns, and she’s tall, blond and glamorous - movie-star beautiful, in fact. What’s really special about her, though, is her spectacular stage presence, her long legs and the gorgeous, expansive shapes she creates with her body, particularly the stunning arch in her back.

Some have hastened to call Mearns, 24, the best American ballerina performing today. That might be a little premature - and it would overlook dancers such as the enticing Tiler Peck and several young colleagues at NYCB, veteran Wendy Whelan and Gillian Murphy at American Ballet Theatre, an estimable swan queen herself.

Certainly one can say that to watch Mearns dance Odette-Odile in “Swan Lake” is to watch a star ascendant - not to mention a glorious pairing of a dancer with the right role.

For that, credit goes to Peter Martins, NYCB’s ballet master in chief, who had the prescience to pluck Mearns from the corps in 2006 - she was 19 - and make her one of his swan queens that season in his version of “Swan Lake.” It launched her career and months later she became a soloist and principal dancer.

Mearns, it has been often noted, does not have the typical body of a ballerina, especially a Balanchine ballerina. Her shoulders and torso are broader, and she is not petite. Rather, she looks almost like an old-fashioned pinup girl.

In Sunday’s matinee performance, she used all this to her advantage as the innocent Odette and the evil Odile. Her Odette - the better of her two swans, at least for now - was imposing from the moment she leaped on stage: long and lean, with a slow, elegant and luxurious way of moving through space. You could not mistake this swan for the others surrounding her, and that was how it should be. She was their queen, regal and commanding.

Mearns used her long arms beautifully to reflect her emotions - sadness, fear, nervousness, a sense of intermittent joy in discovering love for Siegfried.

In the Black Swan section, where Odile and her father trick the prince into thinking she is Odette, Mearns stepped up the glamour with a confident aura. She may not whip off the famous fouette turns with the same prowess as Murphy at ABT, for example, who is so technically adept that she adds multiple turns to the already impossibly challenging set of 32, earning whoops from an audience that is waiting for the moment.