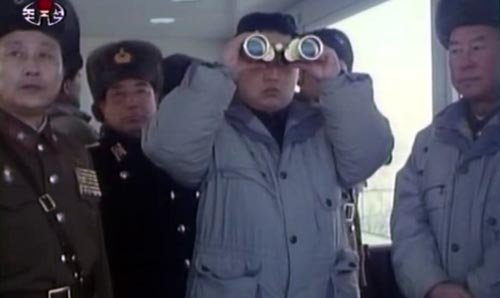 This image captured on North Korean television and released on Feb. 16 by North Korea’s official Korean Central News Agency shows the heir-apparent, Kim Jong-un, during a trip to military bases, apparently holding binoculars upside down. An official from a company that makes binoculars for the South Korean military said Kim is holding the binoculars the wrong way, considering the position of a hole that normally connects the binoculars to a tripod. But others argued that some of the latest models look upended. Experts say Kim would prove his lack of military experience if he indeed held the binoculars in the wrong way. [YONHAP]