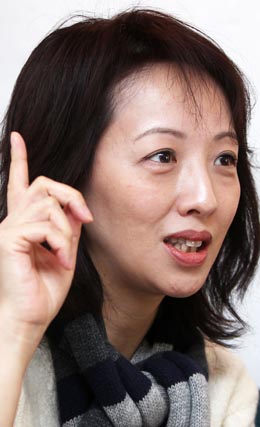 Among ethnic Koreans in Japan, there has been a clear borderline between the North Korean community where its members are taught socialism and communism, and the greater Japanese society that adopts a capitalist economy.

But for Yang Yong-hi, a daughter of an activist of the Japan-based pro-Pyongyang group Chongryon, the boundary was an escape and a hope.

“I was born in Japan and grew up there. My father worked for Chongryon, and my brothers are all in North Korea. See my North Korean background,” Yang said Friday in an interview with Yonhap News Agency.

She is in Seoul on a promotional tour for her documentary film, “Goodbye Pyongyang,” which will be released on March 3.

Her latest movie is about an ordinary schoolgirl living in North Korea.

“The community and school pressured me to accept and learn the ideology and behave as a genuine North Korean,” she said. “I hated that. The one who makes my decision should be myself.”

The 47-year-old director released the first movie in the series, “Dear Pyongyang,” about her brothers’ families, in 2006.

Yang filmed the families while visiting them over 10 years.

The film won awards at the Berlin and Sundance film festivals after attracting attention from the press for revealing the dismal conditions in North Korea.

The second film in the series focuses on her niece Son-hwa.

In the movie, her niece is born in Pyongyang and attends school there.

She is apparently happy and rich, as her family lives on money sent from her grandparents in Japan, looking no different than a teenage student in South Korea or Japan.

“When I saw Son-hwa’s picture, I thought she is like another me. She has a grandfather who’s a Chongryon activist, and her father and brothers are in North Korea,” Yang said.

But Son-hwa and Yang were totally different in terms of the environment in which they lived, even though they learned and chanted the same songs praising North Korean leaders Kim Il Sung and Kim Jong-il in school, and recited poems of the leaders’ achievements.

“Well, I was a North Korean when I was in school. Outside school, I was not. I went to concerts and movies because I was living in a capitalist country,” she said, calling the situation having “double standards.”

“Before [graduating], I didn’t feel any gap between the two ideologies. I think I just enjoyed the crossing, visiting here and there whenever I wanted. I could make a choice any way.

“But Son-hwa is living in a country that forces her to adopt one value. She has no option.”

When it was time to make a decision, Yang chose to free herself from the community that forced her to work for Chongryon instead of studying in college.

“For the first time, I resisted and fought against teachers. I was different from my brothers who fully adapted to the North Korean order,” Yang said.

But her niece has no choice, or does not even know there is a choice that she is not allowed to have.

“I told her that I will make a movie about her family. I told her about filmmaking and film festivals, but she couldn’t understand,” Yang said.

Yang finally opted for South Korean citizenship in 2003, in order to have a convenient passport to travel.

“I didn’t and still don’t want to be South Korean. I just needed a passport that leads me to go wherever I want,” she said.

But she cannot visit her brother and niece, as the North Korean government banned her from entering the North after she made the first movie.

She does not know whether her brothers and niece are in trouble.

“There are no individual voices in North Korea. All people have to say ‘Thank you, great leader.’ No exceptions,” she said.

“But my niece must be happier than them. She said, ‘Thank you, grandma, grandpa.’”