LG Sakers say they’re out to run the table

LG Sakers say they’re out to run the table 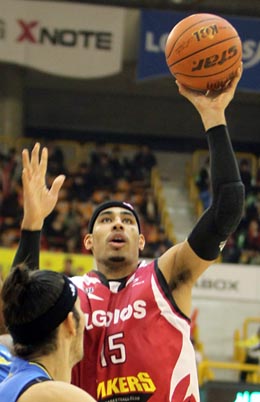 Moon Tae-young of the LG Sakers goes up for a shot against the Samsung Thunders on Tuesday. LG is currently riding a three-game winning streak. [YONHAP]

Moon Tae-young of the Changwon LG Sakers is confident about matching his team’s end-of-year nine-game winning streak to close out last season.

LG has been playing strong basketball of late, defeating the Seoul Samsung Thunders 92-81 on Tuesday to extend its winning streak to three games and further distance itself - by three games - over the seventh-place Seoul SK Knights in the league standings. The top six teams in the season standings make the KBL playoffs.

“Since we have not secured a place in the postseason, we are focusing and playing better,” Moon said.

LG struggled until about midway through the season, finally managing to turn things around after head coach Kang Eul-joon rewarded hardworking players with increased playing time. And young players were the biggest beneficiaries.

Two of the oldest players on the squad, Cho Sang-hyun and Kang Dae-hyup, were scratched from the lineup against SK on Feb. 18 and KT on Feb. 20, respectively. It was Kang’s way of sending a message to his players.

“Our defense has improved since young players like Park Hyung-cheol and Kim Yong-woo started playing more,” said Moon. “We’re focused on stopping the opposition, one basket at a time.”

In the past three games, LG has kept its opponents to 76.3 points per game and has scored 87.3 points on average, which has been the best differential in the league over that time.

“We did not have the best team chemistry and struggled in the early stages of the [season], but we’ve settled into a groove,” Moon said. “We’re fully capable of winning nine straight this season as well. We will look to win all our remaining games.”