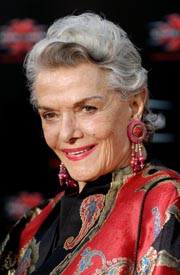 LOS ANGELES - Jane Russell, the brunette who was discovered by Howard Hughes and went on to become one of the biggest stars of the 1940s and ’50s, has died at age 89.

Russell’s daughter-in-law Etta Waterfield said the actress died of a respiratory-related illness on Monday at her home in Santa Maria, Calif.

Hughes, the eccentric billionaire, cast Russell in his sexy and controversial 1941 Western “The Outlaw,” turning her into an overnight star.

She would go on to appear opposite such leading men as Frank Sinatra and Bob Hope, as well as fellow actress Marilyn Monroe.

Although her film career slowed in the 1960s, Russell remained active throughout her life.