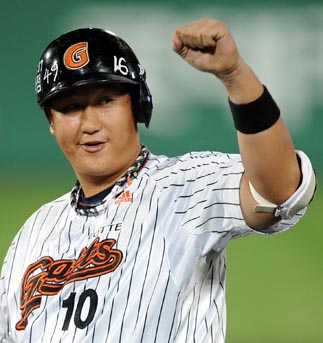 Jeonbuk was tabbed early on as one of three or four likely contenders for this year’s K-League title. The team finished third last year and added forwards Kim Dong-chan and Jeong Seong-hoon to an already high-octane offense that scored the second-most goals in the K-League last year. But Jeonbuk faltered in its first match last week by losing 1-0 in the Honam derby to rival Jeonnam. Seongnam, which finished fifth last year, lost numerous top players to other teams, including national team goalkeeper Jung Sung-ryong, and it will be interesting to see how the 2010 AFC Champions League winners can cope this season with a comparatively lackluster lineup.

It may only be the first week of preseason games but the KBO has set up an exciting slate of matches for fans, including this rematch from last year’s playoffs. The Bears beat the Lotte Giants in the first round to face the Lions, with the winner going on to play SK for the Korean Series trophy. Samsung ended up winning the series in five games before falling to the Wyverns in the Korean Series. Both teams are expected to compete for spots in the playoffs this year.

The Wyverns won the Korean Series pretty easily last year, sweeping the Lions in four games and outscoring them by a total score of 21-10. It was SK’s third title in the last four years, proving the Wyverns have been the class of the league in recent seasons. The Giants have seen some improvement in recent years, finishing third, fourth and fourth in the last three years. Plus, these Busan bashers have the best player in the league right now in Lee Dae-ho, who led every major statistical category last year, except stolen bases, en route to winning the MVP award.