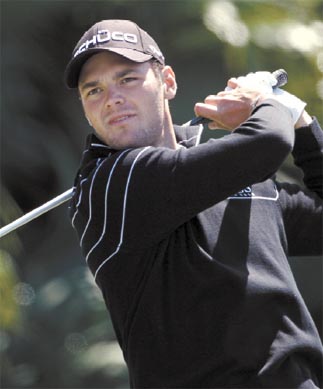 AUGUSTA, Ga. - Martin Kaymer is hoping that some good old-fashioned German organization and timely pointers from celebrated compatriot Bernhard Langer can propel him to Masters glory next week.

The 26-year-old from Dusseldorf has taken the golf world by storm over the last year, winning the U.S. PGA title, his first Major, in August and culminating in his rise to the world’s top spot in February.

But so far the Augusta National, with its devilish greens and suitability for players who are comfortable hitting a draw, has proved too much of a test for him.

But he believes he has what it takes mentally to cope with what is one of the toughest challenges in golf.

“I think the Germans, we are obviously a very organized people and I think when you are on the road, it helps if you are organized. It calms you down,” Kaymer said. “I’m a very calm person, especially on the golf course, very patient on the golf course.

“If you watch Bernhard Langer, how he is, his level of excitement is pretty level. There’s no up and downs, nothing really happens there. I think that obviously helps big time in golf if you have not a lot of emotions.”

To date, patience alone has not been enough for Kaymer to get to grips with the demands of the course and the occasion.

He has played in the last three editions of the tournament and has yet to make the cut, carding rounds of 76 and 73 last year before heading home.

This time around he hopes he can lean on Langer, the first German to win any Major title, triumphing twice at the Masters in 1985 and 1993.

As a past champion, Langer will be playing again next week and Kaymer has already spoken to his countryman and knows that he can rely on him to divulge the secrets of Augusta National.

“He just said he’s very proud of how I kept everything together; that I have a very good family and people around me who keep everything in the line; that I never really lose my focus on things; I don’t lose the ground underneath my feet,” Kaymer said.