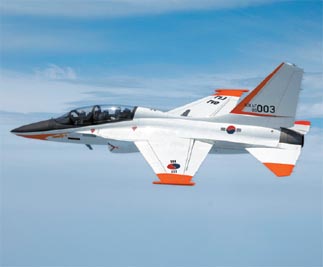 A file photo of the T-50 Golden Eagle. [JoongAng Ilbo]

A senior presidential aide told reporters Tuesday that a long-cherished deal to sell supersonic training jets to Indonesia was virtually in the bag.

But when the news hit the papers yesterday, ministries involved in the negotiations were appalled, and even worried that the comment might disrupt the deal entirely.

“I feel extremely frustrated to see this situation,” said an official at the Defense Acquisition Program Administration. “We thought the deal was almost clinched, and I don’t understand why they’d want to mess it up like this.”

Quoting a senior presidential aide, Korea’s major media reported yesterday that Indonesia will inform Korea as early as next week of its decision to name it as the preferred bidder in its plan to buy advanced trainer jets.

Indonesia will purchase 16 aircraft for a total price of $400 million, the official was quoted as saying in the reports.

“A final decision has not even been made,” said a Ministry of Knowledge Economy official yesterday. “We’ve gotten no official word from Indonesia yet.”

The Lee Myung-bak administration has worked tirelessly for three years to find buyers for its supersonic advanced T-50 Golden Eagle trainer jets, built by Korea Aerospace Industries, and Indonesia has been negotiating since last year.

A T-50 Golden Eagle currently carries a price tag of roughly $25 million. Because it was up to 20 percent more expensive than competing models from Italy and Russia, Korea’s export efforts have faced difficulties.

Officials at the Ministry of National Defense, Knowledge Economy Ministry and Defense Acquisition Program Administration couldn’t conceal their shock and alarm at the comment from the Blue House, particularly since Korea’s negotiations with Indonesia have already been marked by a major embarrassment.

Last month, a high-powered Indonesian delegation, which included the defense minister, made a visit to Seoul to discuss the deal and some Koreans broke into one of the delegation member’s hotel room and swiped a laptop computer. The Indonesian caught the Koreans in the act, and the laptop was returned.

The National Intelligence Service was accused of being behind a botched attempt to steal information about the jet negotiations, but Seoul denied the agency was involved.

Despite the embarrassment, Seoul and Jakarta continued their negotiations.

Another official said the Blue House comment was both indiscreet and premature. “Even if Korea is selected as the preferred bidder, it does not mean we will automatically get the contract,” a government official said. “It will take a long time to actually land the deal even if we actually win this.”