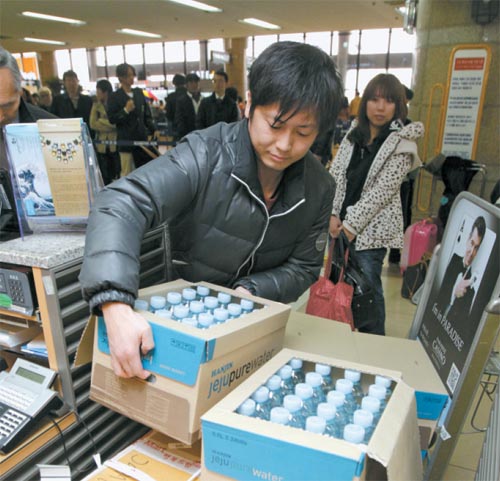 A Japanese passenger flying back to Japan checks in boxes of bottled water and instant noodles yesterday at Gimpo International Airport. The Japanese government put a restriction on bottled water sales in some parts of the country as radiation contamination originating from the Fukushima Daiichi nuclear plant continues to spread. [YONHAP]


Park Seon-hye, a homemaker in her forties from Yangcheon District, western Seoul, bought twice as much sea mustard as she would normally buy while shopping over the weekend.

“I heard on the news that sea mustard is good for dealing with radiation,” she said. “I’ve got children, and sea mustard soup is healthy anyway. I’m planning to serve it much more frequently.”

As traces of radioactive material are being detected in various locations in Korea in the wake of the Japanese reactor crisis, major retailers say sales of sea mustard, masks and other select products have risen as citizens attempt to guard against possible exposure to radiation.

Although experts have noted that some of these products are largely ineffectual and the level of radioactivity does not pose a risk to human health, the sharp rise in the sale of “preventive” products suggests that citizens are still worried.

E-Mart, the nation’s largest discount store chain, said yesterday that sales of sea mustard and kelp at outlets nationwide increased by 122 percent and 95.6 percent, respectively, between March 15 and 21 from the same period a year ago.

As the radiation crisis continues to develop, demand for iodine-containing seaweed has not flagged. Between March 22 and 28, sales of sea mustard and kelp rose by 100.5 percent and 92.5 percent respectively at E-Mart from a year earlier. Lotte Mart reported an increase of 50.9 percent and 62.7 percent in the sales of these products from a year ago.

Sales remain strong despite expert advice that consuming seaweed is mostly ineffectual in preventing radiation exposure. The Korea Medical Association released a statement last Friday that “the level of radiation nationwide is not enough to harm human health, and foods that contain iodine are also not recommended as their preventive effects are limited.”

On Tuesday, when the news that radioactive iodine was detected at 12 locations nationwide, seaweed sales reached a fever pitch, rising 12 percent from the previous day at Lotte Mart.

“On Tuesday, sales of kelp and sea mustard were double the level before the earthquake,” an E-Mart official said.

The scrambling for iodine-related products has also been seen abroad. Consumers have bought up potassium iodine and other anti-radiation medicines and processed kelp products in California.

Retailers in Korea also reported a boost in sales of masks, air purifiers and hand sanitizers as the seasonal yellow dust storms and an increase in colds coincided with the current radiation scare.