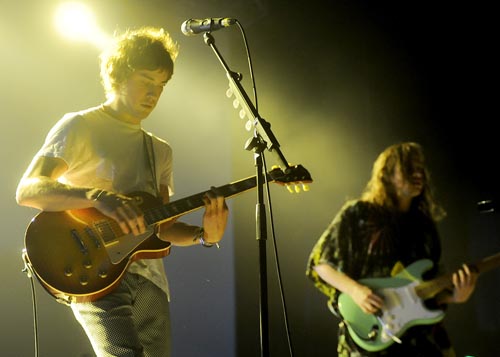 
American band MGMT has never been known for its live performances.

Founded in 2002 by Andrew VanWyngarden and Ben Goldwasser during their college years at Wesleyan University, MGMT has often been panned for its lackluster concerts. Too pretentious. Too aloof. Too cool for school. Oftentimes, the duo just seemed to be phoning it in, donning gimmicky outfits as if to stick a finger into fans’ eyes.

But there were few disappointed fans last week at the band’s sold-out concert at AX-Korea in eastern Seoul, where MGMT made the last stop on its Asia tour. In fact, dare I say, they seemed earnest.

Thrust into the spotlight with its debut album, “Oracular Spectacular” (2007), MGMT made electro-pop songs that have become the soundtrack to a sizable portion of college students’ lives. But their latest, second album, “Congratulations” (2010), was a marked departure in sound - more psychedelic, less dance.

Reconciling the two sounds was the challenge for MGMT in last week’s concert. And despite awkward moments - a rousing hit followed by a subdued 12-minute tune from its sophomore effort - MGMT ably navigated through its discography to deliver a sweaty, memorable concert, alternating between songs from both albums.

After a forgettable, though screamy and androgynous, opening band went on for a few minutes too long, MGMT started off with “Song for Dan Treacy,” “Weekend Wars” and “I Found a Whistle.” Then it was time for a crowd-pleaser, “Time to Pretend,” which sent the crowd into a mild tizzy. Backed by their three bandmates, VanWyngarden and Goldwasser performed with live infrared stream of the concert playing behind them, splashing the venue with color.

VanWyngarden and Goldwasser seemed more accustomed to the spotlight, and their now-global fame was made apparent by the crowd’s enthusiasm.

A few songs after “Electric Feel,” the crowd reached a crescendo when a slow lead-in signaled the song everyone was waiting for - “Kids,” their biggest hit, a song so danceable as to render the dancer drained. VanWyngarden and Goldwasser were clearly having fun, too, spraying water into the crowd as they ambulated around the stage. There was no aloofness here.

VanWyngarden further pleased the crowd periodically throughout the concert with some Korean phrases: “Have you eaten?” “I love you” and “Thank you.”

A personal favorite was when MGMT performed “Destrokk,” a track off its 2005 EP, “Time to Pretend.” The song has a slow buildup that leads to an outright danceable anthem, but the crowd disappointingly didn’t know it.

MGMT returned for a two-song encore, ending with “Congratulations,” a melancholy irony-filled tune about the negatives of fame. It was sort of a jarring, but comforting, reminder that MGMT was fundamentally still the same - that fame isn’t something it’s all too happy with.

Still, it didn’t mean they couldn’t be gracious. Just before the end, VanWyngarden let us all know, “I don’t think we could’ve ended the tour in a better place.”