Room for more than one religion

Room for more than one religion 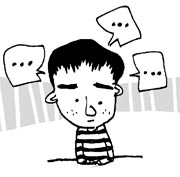 Hans Asperger, an Austrian pediatric neurologist, published the first description of a new mental disorder in 1944. Those with the disorder had the same patterns of behavior and abilities to autism, but their mental and linguistic development were normal. The children were unsociable, had a tendency to become extremely absorbed in their own matters and demonstrated clumsy behavior. Asperger called children with the disorder “little professors” because of their extraordinary ability in their field of interest.

The disorder did not gain wide recognition for nearly 40 years because the paper was written in German and it was believed the study was done only with four children. The term “Asperger’s syndrome” was not coined until 1981 and Asperger’s work didn’t receive international recognition until the 1990s.

It was only a few years ago that the term became known to the public.

Asperger’s syndrome recently attracted attention following the 2010 release of Indian film “My Name is Khan,” in which the protagonist suffers from Asperger’s.

The film deals with prejudice against Islam in American society right after the Sept. 11 attacks. In the film, Rizwan Khan begins to experience prejudice after Sept. 11 and sets out on a journey to meet the U.S. president and tell him that his name is Khan and he is not a terrorist. The film addresses the issues of race and religion, which Khan experiences along the way.

Religion is a contentious issue both in and outside the country. The shadow of secularized religious power lingers and we live with the spectre of a narrow-minded self-righteousness that does not embrace religious difference.

An American pastor burned the Koran and people in Afghanistan reacted by holding demonstrations and shouting “Death to America.” The rallies turned into bloody affairs.

In his 2006 book, “The God Delusion,” Richard Dawkins, a British evolutionary biologist, contends that a supernatural creator almost certainly does not exist.

I worry about a clash of civilizations between Christianity and Islam, as well as between theism and atheism. In “My Name is Khan,” the protagonist firmly believes that there are only two kinds of people in the world: “Good people who do good things and bad people who do bad things.”

That may be true, but no one religion can claim to be the only one that is good.