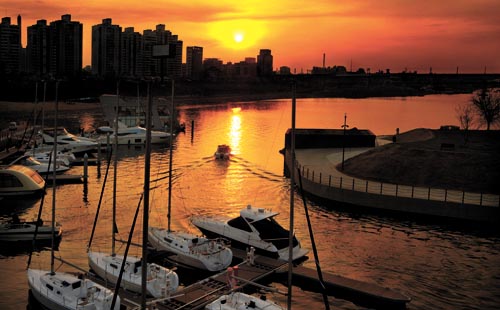 After two years of construction, Seoul Marina opens today on the banks of the Han River. Small boats are only 4,000 won (3.68 dollars) per hour. For a six-person day cruiser, Seoul Marina will charge 90,000 won per hour. By Oh Sang-min

“I visit Yeouido Han River Park often because it’s the most comfortable place in Seoul to spend my free time,” Park said.

But Park, though an avid walker, wants do something on the water this summer. “If you visit Yeouido Han River Park, why wouldn’t you want to play in the water?” Park asked.

While water skiing, kayaking and pedal-boating have been popular leisure activities here for years, a new service begins that is causing quite a buzz in Seoul: Korea’s cheapest yacht rental service.

Yachting has long been the domain of the rich, something that ordinary people only had access to in the fictional realm of movies and television. Although yachting clubs exist in Korea, such as the Seoul Yacht Association, membership is required to have regular access to their boats.

“Yachting? I thought that was only for rich people,” Park said.

After two years of construction, Seoul Marina opens today on the banks of the Han River.

Located behind the National Assembly on Yeouido, Seoul Marina is the first in the nation’s capital and is already the third-biggest in the country, with berths for 90 yachts.

Seoul Marina hopes its prices will help popularize the sport. For only 4,000 won ($3.68), you can rent a small three-person dinghy for an hour. For a six-person day cruiser, Seoul Marina will charge 90,000 won per hour. A spokesperson for Seoul said these are the cheapest rates in Korea.

To ensure the safety of boaters, the marina’s trained personnel will sail the boats. For those who want to captain the boats themselves, courses will be provided for adults and children. 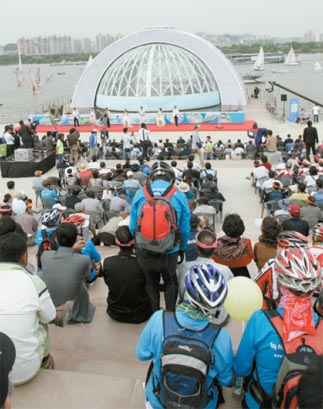 The concert Ggotnori Deun will be held tonight at 9 p.m. on the performance platform known as the Floating Stage.

The 1,000 won per person service gives people an alternative to the Han River’s busy automobile bridges and the bicycle bridge on Mapo Bridge.

Kang Young-soon cruises the Han River’s bike paths every morning. The 59-year-old said she is looking forward to riding the ferry.

“Now I can take a breather while moving from Yeouido to Mapo,” Kang said. Her friends, Kim Bok-soon and Park Sung-rae, are enthusiastic, too. The women, who are both over 60, admitted that there are times when they need a rest. “If we are feeling tired, I think we will have to take that ferry,” Park said.

Yeouido Han River Park is already well-known for its beautiful bike paths. The new Seoul Marina and ferry service are expected to make the park even more popular.

For decades, vendors have been offering bikes for hire along the river. Various types of bikes are available, including those for kids and tandem bikes. For more information, call Hangang Park Headquarters at (02) 3780-0864. 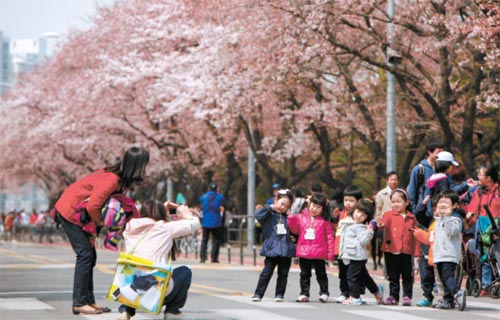 The first-ever Seoul Boat Show opens today and runs through Tuesday. Organizers expect tens of thousands of people to stop by.

Visitors to the event will have access to dozens of exhibitions. About 20 yachts will be open to the public for photographs and tours.

The main event this weekend is the seventh annual cherry blossom festival on Yeouido. The popular flower festival is expected to draw over 100,000 Seoulites this weekend. The festival runs through Monday.

Aside from 14 kinds of flowers at the park, a variety of performances and exhibitions will be put on.

The park has long been a destination for lovers of all ages.

Jang Sang-min, a college student who visited Seoul Marina on Thursday, said he will visit Yeouido Han River Park again this weekend with his girlfriend.

“I think the whole park is an excellent dating place for couples,” Jang said. “Honestly, I did not know that the marina was going to open, but by following the cherry blossom street, I just got here by accident.”

Park administrators have come up with an innovative program they hope will attract more people like Jang. Visitors that collect all three stamps from designated booths will be given a free coffee or a waffle.


How to get here by subway

A bubble-shaped performance platform known as the Floating Stage on the Han River behind Water Light Square offers free concerts to the public this month.

The concert Ggotnori Deun will be held tonight at 9 p.m.

The concert Rice Ball will start at 1 p.m. today featuring 2NB and Han Kyung-il. Before the concert, there will be a charity bazaar at 11 a.m. to help low-income families.

Tomorrow at 2 p.m., the Floating Stage welcomes artists Pafrica and Lee Sung-woo, who will put on a concert named Preview of Fairness. This show will promote charity work in Africa.