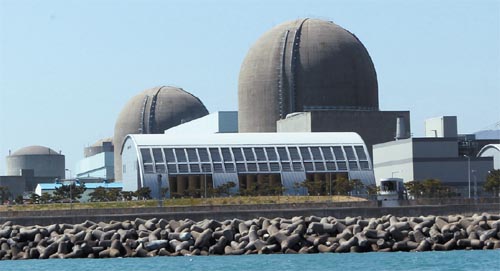 The Gori-3 and Gori-4 reactors in Gijang County, northeastern Busan, where workers accidentally cut off the power supply on Tuesday. As a result, concerns over nuclear safety are increasing. [YONHAP]


The Korea Hydro & Nuclear Power Co. decided yesterday to temporarily shut down the Gori-1 reactor for a thorough safety inspection following a technical glitch last week at the country’s oldest nuclear reactor and an accident Tuesday at an adjoining reactor.

On Tuesday, three engineers checking the Gori-3 power supply system accidently touched a live power cable, leading to an automatic cut-off of power to Gori-3 and Gori-4 and the activation of emergency generators at the two reactors. One engineer was hospitalized. Operations were restored to normal within two hours.

The temporary shutdown will not affect Korea’s power supply because electricity demand is not that high at this time of the year.

“We will undergo a safety examination of the Gori-1 reactor and put the facility back on line if proven to be safe,” said Kim Jong-shin, president and chief executive of KHNP, at a briefing yesterday at the Ministry of Knowledge Economy in Gwacheon, Gyeonggi.

“There have been safety concerns raised about the Gori-1 reactor and also suggestions to permanently stop its operation,” he said. “So we decided that the Ministry of Education, Science and Technology should perform a thorough inspection of the reactor and then we will discuss reactivation with the government based on the results of the inspection and if no problems are found.”

Ever since the 9.0-magnitude earthquake and tsunami that led to a nuclear crisis in Japan, there have been mounting concerns in Korea over its own nuclear facilities. Currently, Korea operates 21 commercial nuclear reactors, and the oldest is the Gori-1, which began operation in April 1978 at the Gori Nuclear Power Plant in Gijang County, northeastern Busan. The reactor went offline in 2007 when it completed its 30-year life cycle. The government extended its life for 10 years in 2008, as has been done for many reactors around the globe. 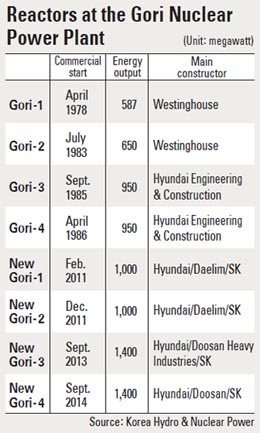 The Gori plant was hit with several technical problems recently. Last week, the Gori-1 reactor went into emergency shutdown after a spark and subsequent fire destroyed one of the reactor’s 27 circuit breakers. The Korea Institute of Nuclear Safety, which inspected the reactor with the KHNP, said Monday that the electrical glitch was due to an aging spring coil inside a circuit breaker, which helps control the electricity system to pump containment cooling water.

The KHNP had planned to resume operation of the Gori-1 reactor last Friday but decided to delay it because of mounting public worry and opposition from lawmakers and environmentalists. The KHNP did, however, conclude that the electrical malfunction last week was a minor glitch that was acceptable at a reactor every five years on average. It said there was no possibility of a radiation leak. It reiterated that the reactor is safe and has been checked by the International Atomic Energy Agency.

“The decision [yesterday to close down Gori-1 for further inspection] reflects public safety concerns over the country’s older reactors, with the final decision of restarting the Gori-1 to be made in consultation with the Science Ministry and the Korea Institute of Nuclear Safety,” Kim said. The two groups are in charge of overseeing safety at reactors in Korea. He also added that KHNP’s initial assessment on Monday that the glitch was minor remained valid.

Over questions about the vulnerability of Gori-1’s emergency backup power generators to flooding in the event of a tsunami, Kim said that they are “exaggerated because the original design has a three-tiered backup system.”